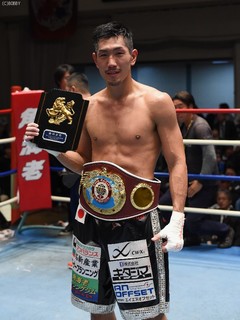 Through history Japanese fighters at 140lbs have struggled to make an impact on the sport globally. There's been a few fighter who have progressed and left a mark at world level, such as Takeshi Fuji, Lion Furuyama, Akio Kameda, Akinobu Hiranaka, Norio Kimura, Keita Obara and most recently Akihiro Kondo.

Sadly even when they make a mark at world level it's rare for them to really leave a lasting impression with Hiranaka's 5 month reign as the WBA champion the last world title reign by a Japanese Light Welterweight. The likes of Kimura, Obara and Kondo all came up short in world title fights, and despite needing to travel for their shots they looked along way below the level needed to win a world title.

The next man looking to try and and make a mark in the division is the unbeaten Hiroki Okada (17-0, 12), a former Japanese champion and the current WBO Asia Pacific champion. At the time of writing Okada isn't only an unbeaten man rising through the ranks, but also top 10 ranked by all 3 world title bodies, and a man well on the way to getting a world title fight in the very near future.

Okada began to make his mark in boxing on the amateur scene, where he went 35-8 (16) and managed to claim a national high school title back in 2007. He would make his professional debut in 2011, at the age of 21.

On his debut Okada stopped fellow debutant Kazuya Nakano in the second round. The following year Okada began to really shine as he went 3-0 (3), needing just 5 rounds to record this 3 wins, including a victory over Suguru Suganuma in the East Japan Rookie of the Year Semi Final. Sadly Okada was unable to compete in the East Japan Rookie of the Year final, against Kento Fukuchi, as he was forced to pull out with an injury, but it was clear that he was a talent.

​His rise continued in 2013 when he team began to step him up, but he continued to destroy his opponents, stopping Ryoji Miyagi in 4 rounds, Heri Andriyanto in 2 rounds and Jaypee Ignacio in 8 rounds.
At the end of 2013 Okada was 7-0 (7) and was ranked #2 by the JBC. With Keita Obara vacating the national title, to chase the OPBF belt, Okada would get a chance to face #1 ranked Masayoshi Kotake for the vacant title. For the first time Okada was up against someone who could take his power, but Kotake couldn't match Okada in terms of output or skills, with the unbeaten Okada claiming the title courtesy of a 10 round unanimous decision. With the win Okada claimed his first professional title, and would hold on to it for over 2 years.

As the Japanese champion Okada made his first defense in July 2014 against the bit hitting Koichi Aso, a man who would later win the title. Aso gave Okada absolute hell with his aggression and power, but Okada's calmness and counter punching were enough to secure his first defense and over-come the then #5 ranked challenger.

Okada's second defense came in early 2015 when he faced the then #1 ranked Hayato Hokazono in a blood bath. Both men were cut very early on, with Hokazono suffering a really nasty cut that covered his face in claret almost immediately. Despite the Hokazono looked to stop Okada and really was aggressive, with that aggression finally costing him when he was dropped with a counter right hand, which quickly ended the bout. It was a thrilling contest and one that showed Okada could fight hard under pressure.

A scheduled rematch with Kotake was supposed to take place in the summer of 2015 but was cancelled why Okada fractured his thumb in training. That lead to Kotake fighting for the interim title, against against Masanobu Nakazawa, with Nakazawa coming out on top and earning a shot at Okada in 2016. This ended up being a mismatch with Nakazawa being saved in 3 rounds with the referee and his corner both ending the bout, and saving a bloodied and beaten challenger. A rematch with Koichi Aso ended with Aso being a bloodied mess with nasty cuts over both eyes. Okada remained busy through the year and would score a technical decision win over Cristiano Aoqui and then a decision over Valentine Hosokawa to end the year. Both of those bouts were much more competitive than the score cards suggested, but Okada gritted both wins out.

At the end of 2016 Okada vacated the title and began his charge towards getting a world title fight. His begin 2017 by stopping the game but over-matched Rodel Wenceslao before out pointing Jhertiz Chavez, in a very good test for Okada. To end 2017 he stopped an out of shape Jason Pagara, who looked like he didn't want to be in the ring. The win over the over-weight Pagara saw Okada claim the WBO Asia Pacific title, and boost his chances of getting a WBO title fight.

At the time of writing Okada is set to face Ciso Morales (19-6-1, 12) on May 5th at the Korakuen Hall. A win for Okada is likely to be his final win before getting a world title eliminator. At the moment the 140lb weight class is quite wide open, and whilst Okada won't be fancied against any of the champions, he will feel like he has the skills to compete and will likely get the chance to prove that sooner rather than later.

For those who haven't seen Okada he's a boxer-puncher who can involved in a war, but is more comfortable on the outside as a counter puncher. It's whilst the pace is slower that he can use his boxing brain, power and stiff shots. When the pace is raised he can look handcuffed at times and can struggle to change the tempo of the bout. At times this does make him look one paced, but with his power, he can often get away with that, at least on the domestic and regional level. At world level he will have to show a lot more, but we dare say he has got more in his arsenal than he's shown us.