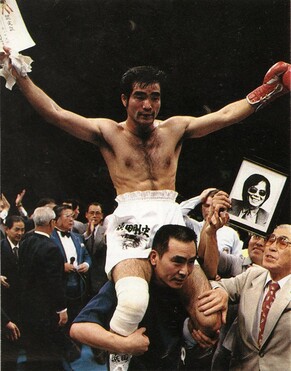 When we look at the most significant retired fighters in Japan few have the power that Tsuyoshi Hamada (21-2, 19) has, with Hamada being a key figure within the Teiken set up, and has major roles on TV, often appearing on the G+ "Dynamic Glove" broadcasts, NTV broadcasts and WOWOW broadcasts. Hamada however, hasn't always been a father figure of Japanese boxing, and at one point he was a world champion, a highly respected fighter, a huge fan favourite and a serious puncher.

Born in Okinawa in November 1960 Hamada was part of a huge family, with as many as 21 people living under a single roof. He was the youngest of 7 brothers, and it was always going to be hard to get attention in such a big family, especially as the youngest.

It would be one of Hamada's older brothers, Yuji, who inspired him to begin boxing in elementary school, and it wasn't long until his natural punching power showed through. In fact he was hurting kids significant older when he got in the ring, and there was few able to cope with the brutish power of the youngster. Yuji, who was 6 years older than Tyuoshi, even suggested that his younger brother was hitting harder than people at Junior High School.

In the amateurs Hamada would have a stellar career, going 37-6 (28), taking an inter-high school title in 1978. Following graduation he would then begin training at Teiken who would manage him through his professional career.

Despite his solid amateur background Hamada would debut in 4 rounds bouts, and score a 2nd round KO win on debut, stopping Norimasa Kakegawa. That was followed by a quick blow out win over Masahiko Murayama before Hamada suffered a decision loss to Fusao Imai. That loss would by Hamada's only loss to a domestic rival during his entire career, it would also be his final bout before progressing into 6 round bouts.