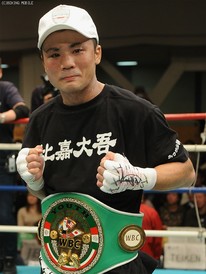 Over the last few years we have seen a rise in Japanese “Super Prospects”, youngsters who turn professional following strong amateur showings and race through the ranks. They have included fighters like Kazuto Ioka, who is a 3 division world champion, Naoya Inoue, who is a 2 world champion, Kosei Tanaka who won a world title in just his fifth bout, and to a lesser extent Japanese champion Ken Shiro and former OPBF title holder Takuma Inoue.

We have also seen those with out the amateur background race through the rankings with the most recent of those being the all action Daigo Higa (10-0, 10) [比嘉 大吾], who looks like the best Flyweight prospect on the planet and one of the most exciting young fighters out there.

​The youngster turned professional with no massive expectation on his shoulders. His amateur record was a solid but unspectacular 36-8 (8) and he did little of genuine note in the national tournaments, coming 5th in the National Sports Festival. Unlike those other prospects named above, who all won national titles.

Given the lack of national amateur success the then 18 year old Higa debuted, like many, as a C license fighter fighting in 4 rounders. His debut lasted just 50 seconds, as he demolished Thailand's Saijuea Tosandet/Saengkeng Saknarong. His second bout lasted much longer, taking almost 2 rounds to defeat Rotthang Wor Por Srisaket, but it took just 80 seconds to take out Keisuke Fujii, his first domestic opponent, and 96 seconds to over-come Samruai Mungwong/Pongpayu Chaiyonggym, in a bout in South Korea in January 2015.

Those first 4 bouts were all 4 rounders. It's not unusual for fighters in Japan to fight in 4 rounders, but usually the most touted guys move through the scheduled rounds quickly. Amazingly it wasn't until Higa's 5th bout that he was moved into 6 round bouts, but unsurprisingly he didn't need 6, as he took just 2 rounds to get rid of Filipino fighter Virden Rivera, who's only previous loss was to Rex Wao in 7 rounds.
Higa went from strength to strength in 2015 and built on the wins over Pongpayu and River by stopping Cris Alfante in 4 rounds, doing a more impressive job on him than both Florante Condes-who took 7 rounds to see off Alfante, and Knockout CP Freshmart-who took 5 rounds.

Then came his first big win, which saw him travel to Thailand to defeat the then unbeaten Jakkrawut Majoogoen/Kongfah CP Freshmart, who was 14-0 at the time. The bout with Kongfah saw Higa travel to face the Thai in Thailand for the WBC Youth title and the two men engaged in an absolute war for 6 rounds before a tired Kongfah was stopped, just over a minute into round 7. That bout was Higa's first 10 rounder and saw him keep up the energy and aggression to see off Kongfah, despite the harsh Thai conditions.

Amazingly Higa managed to squeeze in a 5th bout during 2015, as he defended his Youth title for the first time. That bout saw Higa stopping the tough and brave, but very out classed, Renren Tesorio in the 10th round of their bout. Tesorio showed his bravery making it to the final round but was eventually saved by the referee with less than a minute left as Higa moved to 8-0 (8) overall and 5-0 (5) for the year.

By the end of 2015 he had become one of the worst most exciting prospects. He had gone from being a 4 round novice to a man on the lips of hardcore fans, he had began to be dubbed the “Romagon of Okinawa”, a moniker relating his style to that of Roman Gonzalez, and was beginning to get a growing fan base in Japan. He was also getting comparisons to mentor, and former Light Flyweight great, Yoko Gushiken​ who appeared to be acting like a father figure to the young Higa.

In 2016 he began things in destructive fashion dropping Romel Oliveros 4 times in the second round to stop the Filipino and record the second defense of the Youth title. Higa often maligned defense had appeared much improved against Oliveros as he hardly took a shot clean despite his ultra-aggressive.

The win over Oliveros saw Higa begin to use the music associated with his mentor, “Conquistador” by Maynard Ferguson and it was that same track that played him out to his most recent, and most impressive, performance, a beat down of former world title challenger Ardin Diale. Going in Diale was the OPBF Flyweight champion, a confident and experience fighter with a number of notable performances on his record, including a very hard fought loss to Higa's stablemate Koki Eto. Despite that Higa chewed him up and spat him out with a 4th round TKO win. Diale was down in rounds 2, 3 and 4 and was swollen around the face at the time of the stoppage as Higa proved his legitimacy.

The future for the youngster looks really exciting and there is already talk that Higa may be chasing a New Year's Eve showdown with countryman Kazuto Ioka in what would be an instant classic for Japanese fans. If Higa can't get Ioka then it's likely that his team will chase any other champion and there's a really good chance he could stop them. He's one of the most frightening little guys in the sport and is someone who improving every fight.

​Although ultra-aggressive it seems clear Higa is basing his style on Roman Gonzalez and has a similar tight guard, with lovely body shots and great punches up close. Given his size he may find moving through the weights difficult but at Flyweight he looks likely to be a real handful for anyone over the coming years.