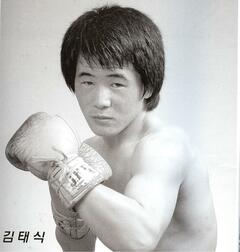 When we think of the prime time of Korean boxing we typically think about the domination of the Light Flyweight division by Jung Koo Chang and Myung Woo Yuh through the mid 1980's and earlier 1990's. It is however worth nothing that Korea had numerous other great fighters in the 1980's, many of whom have often been overlooked and under-appreciated, especially by Western fans. One of those great fighters was Tae Shik Kim (17-3, 13), who was dubbed "Stone Fist" for his brutal power. He would be one of the big stars of the Korean scene in the early 1980's, despite only having a short career.

Kim apparently had no amateur experience prior to making his professional debut in September 1977, as a 20 year old. His career didn't get off to a great start as he was knocked out, in 3 rounds, on debut by Kee-Bong Koh. Amazingly Koh has no other recorded bouts, so his only bout saw him knocking out a future world champion.