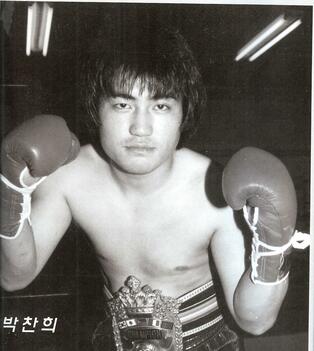 When we think of world champions from Korea it does seem like Chan hee Park (17-4-2, 6) often gets over looked, despite having been a key figure in the Flyweight division in the late 1970's and early 1980's. His short career, which consisted of 23 fights in a little over 5 years, certainly didn't help him to leave a lasting impression, but he certainly did more than enough to deserve attention. He was the first Korean world champion not to claim minor titles on his way to a world title and he fought 9 bouts at world level, more than 1/3 of his total career.

Born in Deagu on March 23rd 1957 Park would first make a name for himself in the amateurs, whilst still a teenager.

Aged just 17 when he went to Tehran, Iran, to fight in the Asian Games, Park would surprise everyone by taking the Gold medal at 48KG's. Along the way he would beat Singaporean Syed Abdul Kadir, who had won a bronze at the Commonwealth games, future Olympian Noboru Uchiyama and local hopeful Abdolreza Ansari, who Park beat in the final. That same year he travelled to the US as part of a USA Vs Asia event, and stopped Albert Sandoval in what was a winning effort for Asia. Sandoval would later turn professional and fight for the WBC Bantamweight title, challenging Lupe Pintor.