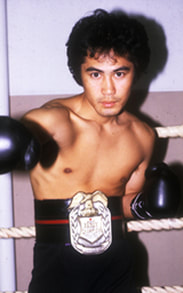 When we talk about all time great Japanese fighters we, of course, mention Light Flyweight legend Yoko Gushiken. What we don't often remember is that there was a fighter dubbed "Gushiken II.

"Gushiken II" would be the nickname of Tadashi Tomori (19-7, 5) another Japanese Light Flyweight world champion from Okinawa. He viewed as the future star of the region, though fell well short of the expectations that he come on his shoulders at an early age. He still, however, managed to achieve a lot more than many fighters could ever dream of.

As mentioned Tomori was from Okinawa, born in Naha City in 1959. He would shine as a teenager, winning the All Japan High School competition in 1977 at Mosquito weight. That natural talent shined through and it was clear he had developed a style in the amateurs that worked well for him, focusing on his speed, his movement and his reflexes. It was an amateur style, but a style similar to that of the top amateurs of the day and held him to a record of 16-4 (3) whilst focusing on his speed and movement.