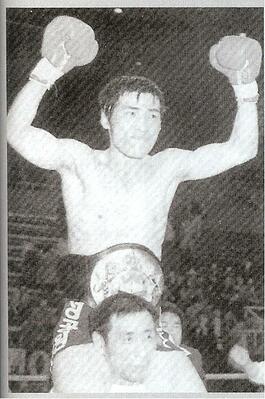 Although Ju Do Chun was the first Korean to win an IBF world title, back when the IBF was IBF-USBA, he wasn't the first to fight for one. Just 6 days before Chun won his belt his compatriot Sung In Suh (22-5, 9) had actually come up short in a bout for the IBF Super Bantamweight title. Suh is, like Chun, one of the many Koreans of the early 1980's who is now forgotten, but played a key part in Korean boxing, and the growth of the IBF following it's creation.

So let's have a look at Suh, his career, and short but notable career.

Suh was born on July 18th 1959 in Seoul and as a young man he signed up with one of the two main Korean promotional outfits of the time, Dong A.

Like many Korean fighters of the time Suh would begin his career with an incredible schedule. He debuted on October 8th 1978 and finished the year having had 5 fights. He would actually lose his debut, losing a 4 round decision to fellow debutant Mun-Pyo Chang, but bounce back with a win in November, defeating Chong Soo Kim. In December Suh would fight 3 times in 4 days, beating Hee Baek Lee, on December 6th, beating Man Soo Han on December 8th and then lose to Mun-Pyo Chang, in what was a rematch of their debut.