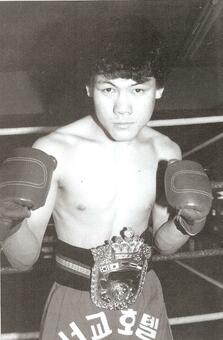 Today the IBF is considered as one of the "big 4" but it wasn't always like that, and in fact the IBF didn't exist until the early 1980's. Interestingly, the first IBF champion from Korea was Super Flyweight Ju Do Chun (20-4-3, 11) who fought from 1981 to 1989 and had a bit of a strange career which saw him setting quite a few records. Not only was he the first Korean IBF champion but he was, and still is, the youngest Korean to win a world title, of any kind.

So lets roll it back and look at who Ju Do Chun was and what he did in boxing.

Chun made his professional debut in Seoul at the age of 17, Kyu Sang Choi on May 8th 1981. He would suffer his first professional just 2 days later, and then fight back to back draws the following month. In the space of 7 weeks Chun had gone 1-1-2, fighting 16 rounds. That type of hectic schedule is something we don't often see now a days, but shows how the Korean system of the early 1980's, especially for Rookies, worked.

Although his start was less than great he was fighting for a promoter who had stars and had shown an ability to mould champions. At that point Chun was too inexperienced to become a champion so his team kept him incredibly busy and by the end of 1981 he had fit in another bout, moving his record to 2-1-2 (1). The following year was also a busy one for Chun, who fit 6 bouts into 1982, moving his record to 7-1-3 (2). Not only was he active but his bouts were becoming tougher and he was fighting in 8 round bouts on a regular basis by the end of the year.