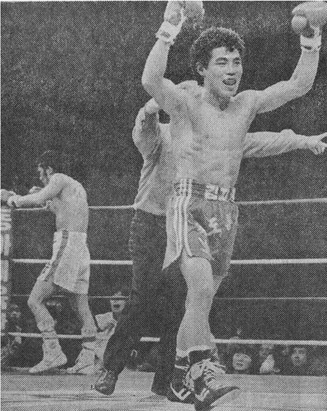 In the history of boxing not many fighters have retired unbeaten whilst also scaling the highest peaks of the sport and becoming a world champion. Although it's an achievement that is easy now than it once it's still not something we tend to see very often.

One of the first men to actually manage the feat was South Korean Ji-Won Kim (16-0-2, 7) who was an IBF Super Bantamweight champion back in the 1980's and made 4 defences of his title before retiring in 1986.

Born on August 6th 1959 Kim excelled as an amateur and by his late teens he was already making a name for himself on international stage. This really began in 1978 when he claimed gold at the Asian Junior Amateur Boxing Championships in Flyweight division. The following year the Korean would add a gold from the CISM Amateur Boxing Championships, again at Flyweight, and it seemed he was becoming a real menace at top of the amateur game. Not only was he talented but also powerful, as Oudahi Mohammad Amin found out.

The amateur success of Kim grew and grew and in 1980 he was crowned the Asian Amateur Champion as well as the winner of the King's Cup, an award he would win again the following year. Unfortunately however Kim never got the chance to prove himself at the 1980 Olympics as South Korea boycotted the Moscow games. That was pretty the only major competition he failed to win in his short amateur career that unfortunately took off after the 1978 World Amateur Champions and ended before the 1982 World championships.

Following his stellar amateur career Kim turned professional and made his debut on January 24th 1982. On his debut he was matched with fellow professional novice Hyun-Shik Ahn in an 8 rounder. Although Ahn had fought twice previously, losing both of those bouts to future world champion Chan-Young Park, he couldn't use that experience to over-come Kim who took a decision over 8 rounds.

Having kicked off his career in January 1982 Kim would end the year with a record of 4-0-1. His only set back was a 10 round draw with the much more experienced Neptali Alamag of the Philippines. Alamag, who had more than 40 fights under his belt, managed to call on his experience to give Kim hell though wouldn't do enough to impress the judges enough to give him the win. On paper it was nothing to be ashamed by especially given that Alamag would later claim the OPBF Bantamweight title.

Kim would remain consistently active in 1983 as he doubled his record to 8-0-2 (1). Strangely he was held to another draw by Alamag, in what was his second fight of the year, though he other than that set back the year was perfect for Kim as he claimed the South Korean Super Bantamweight title and the OPBF Super Bantamweight title, whilst also scoring his first stoppage victory, a 2nd round KO of Lito Cortez in his last bout of the year. Sadly however for Kim the draws with Alamag left questions about whether or not he could beat a solid and experienced for, afterall his wins had all come against limited foes and his draws had come in his two bouts against solid competition.

Having won the OPBF title in October 1983, with a win over Filipino Little Bangoyan, Kim would make 4 defences of the title including one over the aforementioned Cortez at the end of 1983. Not did Kim maintain his winning record but he also began scoring stoppages including a 4th round TKO Saipa Monod, who would later be blasted out in a round by Samart Payakaroon, and a 6th round stoppage against Fel Malatag.

The growing confidence in his power proved to be useful the following year when Kim stepped up significantly in class. His first fight in 1985 was a huge step up though one he came out on top of courtesy of a 10th round KO against Sung-In Suh, the then reigning IBF Super Bantamweight world champion. That win saw Kim becoming a world champion in just his 14th fight and becoming the the 3rd man in history to hold the IBF title at 122lbs. Prior to the loss to Kim we had seen Suh winning the the world title in in 1984 with a 10th round TKO over Filipino Bobby Berna, avenging a loss the previous year to Berna. In the 8 months or so that Suh had held the title he had defended it just once, stopping Nicaragua's Cleo Garcia in 4 rounds. Unfortunately for Suh he had had been worn out by the pace of the bout and crumpled from exhaustion as well as the hard damaging shots from Kim.

Kim's first defence came less than 3 months after his victory with Suh and saw him taking a decision over Colombian Ruben Dario Palacios. At the time this victory looked somewhat ordinary though Palacios would later go on to claim the WBO Featherweight title before his career was sadly cut short by AIDs in the early 1990's and he died in 2003. Less than 3 months after the victory against Palacios we would see Kim return to the ring for his second defence. That would see him score a 4th round KO over Filipino Bobby Berna, the first ever man to hold IBF Super Bantamweight title. The KO over Berna was spectacular though Kim certainly didn't have things all his own way and he was hurt and dropped in an action packed third round.

Kim would make the third defence of his title against former for Sung-In Suh who lasted just 66 seconds as Kim had his most destructive and impressive performance. Sadly for Suh that would be his final bout before retirement ending his career 22-5 (9).

Kim would just once more defending his title in 2 rounds against Filipino Rudy Casicas. The bout with Casicas was a hard one and Kim was dropped in the opening round before finishing off his challenger in the following round to record his 16th and final win. Soon afterwards he turned his attention from the boxing ring to the entertainment field and started acting and singing. We're unsure how his foray into the Entertainment field went in terms of success but in the boxing ring he was a real success.