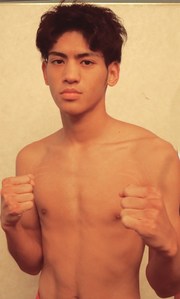 The Okinawan boxing scene is hot right now thanks to the rise of Daigo Higa, who has helped kick start a scene that, for a long time, seemed to be about dead. With the rise of Higa we've seen the Shirai Gushiken Gym manage to sign a number of interesting fighters and work with some others, who have all been part of the Okinawan resurgence in boxing. One of the most interesting and promising is youngster Ryuto Owan (3-0, 2) who some view as the next star from the region.

Born in Uruma, Okinawa back in April 1998 the youngster managed to generate a bit of buzz as an Under 15 national champion, and caught the eye of several promoters. Those promoters were also able to follow him as he came 3rd in a national high school competition and it was clear the youngster was a prodigious talent.

In the unpaid ranks Owan had a reported 43-6 record, an impressive figure for someone so young, but it seemed like his style was more suited to the professional ranks and it's said that Yoko Gushiken himself scouted the teenager.

Last April Owan took part in his pro-test bout, sharing the ring with the excellent Kenya Yamashita, and really shining against his heavy handed partner. It was clear from the off that Owan had a razor sharp jab, great movement and the skills that really looked like they were going to shine with in the professional game.

On May 20th last year Owan made his debut, doing so on the under-card of the first Ryota Murata Vs Hassan N'Dam bout, a show which also saw Higa become the WBC Flyweight champion as he stopped Juan Hernandez. On debut Owan stopped Thai foe Saenrachan Sor Theptanee in 2 rounds. Before the stoppage he had showcased his skills, dropping the Thai a number of times, and showed the ability to target both the head and body at will.

Owan would return to the ring less than 3 months later, as he took on Oatthaphon Kruaisawat inside a round. The bout lasted just 71 seconds but showed the footwork that Owan was capable of as he easily controlled the range and found room for the KO blow.

In his third bout, which came last October, we saw Owan step up in class to take on once beaten Filipino Alvin Medura. Medura had come into the bout with a puncher's reputation and had managed to upset then then 8-0 Michael Javier just 2 fights earlier. Medura's reputation as a dangerous fighter was almost ignored by Owan, who dropped his man early and really took the fight to him. Owan completely dominated the 6 rounder to take the decision with scores of 60-53 and take a huge step towards bigger and better bouts.

Owan will return to action on February 4th at the Okinawa Prefectural Bodukan as he takes another step up in class and faces the very dangerous Jun Blazo. Blazo, who dropped Owan's stable mate Koki Eto in 2016, has lost 3 of his last 5 but has real power in his fists and will almost certainly give Owan a chin check and a gut check. To date Blazo's only stoppage loss has come to Eto, and he gave the talented Hayate Kaji a real gut check last time. Owan should be favoured to over-come Blazo, but this is set to be a very serious test for the 19 year old, who is likely to be moved into 8 round bouts if he can defeat the hard hitting Blazo.