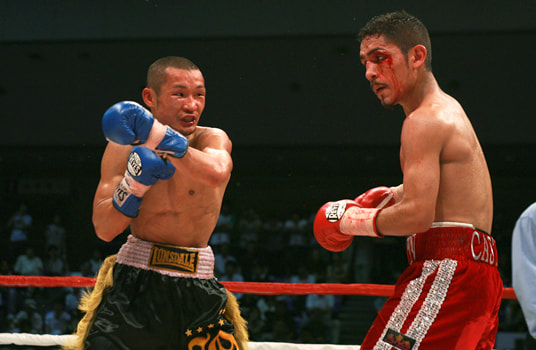 At the moment the Super Flyweight division is one of the most notable in the sport. It's not as deep as it has been in recent years, but it's still a fantastic division full of talent and really interesting match ups. Through it's history it has been a division of real intrigue with some amazing fighters, and excellent fights.

One of the best things about the division is that fighters who tend to fight there look to make a name for themselves quickly. We rarely see fighters at 115lbs running up long unbeaten records before getting a world title fight. What we usually see if fighters either rebuilding from an career early loss to carve out a career at the weight, fighters who have made a name for themselves move up or fighters being fast tracked.

One of the most notable fast tracked fighters of recent years was Nobuo Nashiro (19-6-1, 13) who at one point held the joint Japanese speed record for fewest fights to become a world champion, and did so with a style that was made for TV. Not only was he fast tracked as a professional but he was also an accomplished amateur and a very tough, gritty man who had 11 world title fights in his 26 fight career. If we include his Japanese title fights half of his career was spent fighting for gold and a good portion of it was spent fighting top competition.

Born in Nara City in 1981 Nashiro ran up 38-19 (20) amateur record. It was nothing spectacular by any stretch of the imagination but mixing on the Japanese amateur scene he had developed a very pro-ready style, and his power and physicality were impressive straight away. His technical skills lacked, but he had the traits to become a more rounded professional fighter. His skills, like many fighters, were more suited to the paid ranks and he dropped out of Kinki University to begin his professional career.

In 2003 he began his campaign as a professional , at 21 years old. He would make an instant impact on the sport, stopping Shigeki Ichinomiya in just 32 seconds, of a scheduled 4 rounder, on July 11th 2003. Nashiro would return to the ring in September, when he easily disposed of Kunihiro Kinoshita in the second round of the bout, this time a scheduled 6 rounder. To the end 2003 Nashiro would record another early stoppage, beating Takeshi Sekiguchi in 155 seconds on December 21st.

With 3 quick wins to begin his career the Mutoh gym realised they had to give Nashiro bigger and tougher tests. They did this in March 2004, pitting their man against the tough Takashi Taketazu, who had never been stopped and had actually been the first man to defeat Hozumi Hasegawa. The tough Taketazu managed to take the firepower of Nashiro and extend him the scheduled 8 rounds, whilst forcing Nashiro to show much more than just raw power. It was a fantastic bit of match making and the win just built Nashiro's confidence the belief his team had in him.
The win over Taketazu saw Nashiro being rewarded by getting a fight against Hidenobu Honda, a former 2-time world title challenger who had recently lost decision bouts to Pongsaklek Wonjongkam and Alexander Munoz. For a fighting in just his 5th bout this was a massive risk for Nashiro, but a risk he knew would come with rewards. The 22 year old managed to dig deep and take a tough and hard fought decision win over Honda, and move into the world rankings.

The win over Honda had taken Nashiro from a little known fighter in Osaka to a world ranked contender, a hotly tipped prospect, almost overnight. It had also moved him towards a Japanese title fight and tragedy.

On April 3rd 2005 Nashiro fought in his first title bout, fighting against Japanese Super Flyweight champion Seiji Tanaka, who was making his first defense. Nashiro would take a 10th round TKO win over Tanaka, who was stopped with a little over 2 minutes of the bout left. Sadly in his dressing room Tanaka would collapse, and would pass away shortly afterwards due to a subdural hematoma. The title glory had quickly become a nightmare for Nashiro who contemplated retirement due to the feeling guilt. The fighter, who was one the verge of a world title fight, seemed to be lost. That was until a meeting with Tanaka's father who told Nashiro to continue fighting.

Just over 7 months after Tanaka's passing Nashiro would return to the ring to defend the Japanese Super Flyweight title and would narrowly defeated Prosper Matsura, himself a former Japanese national champion. That win would help boost Nashiro's ranking with the WBA.

On July 22nd 2006, just over 3 years after debuting, and with just 7 fights under belt Nashiro would face off with WBA Super Flyweight champion Martin Castillo. The champion had won the interim title in May 2004, beating Hideyasu Ishihara in Gifu, Japan, taken the full version of the title in December that year, beating Alexander Munoz, and had notched 3 successful defenses, with wins against Eric Morel, Ishihara in a rematch and Munoz, also in a rematch. The fight was fought at a great pace straight away and went on to be a bit of a war with Castillo being backed up repeatedly by the intense pressure of Nashiro. The pressure told, with Castillo suffering a cut that would eventually cause the bout to end in round 10, giving Nashiro a massive, career defining, win and the WBA title.

By claiming a world title in just 8 fights Nashiro equalled the record of Joichiro Tatsuyoshi, who had also won a world title in his 8th professional bout. That record would continue to be a Japanese national record until 2011 when Kazuto Ioka became a world champion in just his 7th bout.

Nashiro's first defense came less than 5 months after his title win, as he took a 12 round decision victory over Mexican challenger Eduardo Garcia. That bout was then followed by Nashiro facing off with former champion Alexander Munoz in May 2007. Nashiro entered as the betting favourite against the then 29-2 (27) Munoz but the challenger defied the odds and relied not on his power, as many expected, but instead his movement and boxing. By boxing and moving, and using his heavy jab, Munoz managed to control the range and control Nashiro en route to a clear decision win.

Having lost his title Nashiro's career then took another hit, as he suffered a spinal injury from a car accident. Despite that injury he was back in the ring only months later, scoring a 3rd round TKO win over Petchklongphai Sor Thantip. That win was followed by another over a Thai foe in March 2008, when he defeated Sairung Singwancha.

In September 2008 Nashiro got a chance to become a 2-time champion, as he took on fellow Japanese fighter Kohei Kono in a bout for the now vacant WBA title. The title situation, as we have began to see a lot with the WBA recently, was becoming a mess with a Super champion Cristian Mijares, an interim WBA champion, Rafael Concepcion, as well a vacant world title, the one Nashiro and Kono were fighting for. Despite the messy title situation the bout was a thriller with both men fighting hard in an ultra-competitive contest that could have gone either way. For Kono it was a set back in his first world title fight, whilst Nashiro became a 2-time world champion.

Nashiro's second reign as a champion was more interesting than his first. In his first defense he took on the flamboyant Konosuke Tomiyama. The fight was expected to be a total mismatch in favour of the champion but surprisingly it was Tomiyama who took the upper hand early in the bout, dropping the champion after about 40 seconds of the contest. Nashiro was downed again in round 6 and he had began to look vulnerable, something he hadn't looked earlier in his career. Nashiro had gutted it out and in round 8 be turned the tables completely, turning the fight into his fight, dropping Tomiyama and later forcing a stoppage as he let his hands go with bad intent.

In his second defense Nashiro held on to his title with a split decision draw against Hugo Fidel Cazares, The was a razor thin call. Cazares seemed to have the edge in technique and speed, especially early on, but Nashiro who have a good finish as Cazares became very negative when he became tired. Both men seemed to think they had done enough to deserve the decision, but it looked like Cazares had deserved to edge the decision. A rematch would see Cazares fighting with more self belief and doing more than enough to earn a clear decision over Nashiro.

In his comeback bout Nashiro would defeat Iwan Key, with a 3rd round KO, before getting a shot at WBC champion Tomas Rojas. Sadly Nashiro would come up short in a competitive contest against Rojas. He would be deducted a point for an accidental headclash and would really lack the sharpness to deal with Rojas, and his awkward size and style.

A comeback win over Rey Perez would act as a tune up for Nashiro ahead of another world title challenger, this time against Suriyan Sor Rungvisai, who had taken the WBC title from Rojas. Again Nashiro would come up short, with Suriyan being too quick, too smart and too accurate for the Japanese fighter, who was now 30 and looking like a shell of the fighter who had raced to a world title early in his career.

With losses starting to mount up and his style not being the best for a long career some began to wonder just what Nashiro had left. A few straight forward wins against over-matched foes did little to convince anyone he had anything left, but they did do enough to help him get another shot at a world title in September 2012. This time it was against Tepparith Kokiettgym, and this time around Nashiro showed there was still life left in the old dog as he pushed the talented Tepparith all the way in a nail biting fight, before losing a majority decision. It seemed like he had put everything into the contest and afterwards announced that he would be retiring.

As we have seen throughout the history of boxing his retirement didn't last long. On March 7th 2013 Nashiro would return to the ring for one final run. On his return he scored a 6th round KO win over a Thai visitor. That would lead to one more big bout, this time against Denkaosan Kaovichit in Thailand for the WBA “interim” Super Flyweight title. Once again Nashiro would come up short, with Denkaosan being juts a touch too sharp and too quick for the Japanese fighter.

Following the loss Nashiro would retire for good and has since gone on to become a boxing coach at the Kinki University, going full circle and training fighters at the University he left to become a professional fighter.

(Image courtesy of the JPBA)