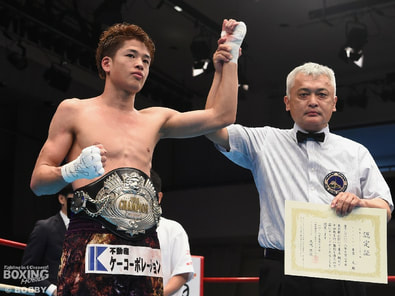 When we talk about how good a boxer is, we often talk about the eye test. Rating fighters on how they look in the ring. Do they look like a star, do they pass the eye test, do they have a good style and the tools to go a long way? Some fighters do however make the eye test a bit less clear, a bit more complicated. You can sometimes tell a fighter is talented, but they fail to rise to the occasion, or they are better than they look. One example of someone who shows the flaws in the eye test is Japanese Super Featherweight champion Masaru Sueyoshi (18-1-1, 11).

Sueyoshi does look good, but at the same time he always looks wrong, awkward and like something isn't right. That however is an excellent part of his style and his success, he draws mistakes from opponents by fighting at an unusual pace, forcing fights to be fought at unusual ranges and despite not looking like a star, due look like someone who will always be very hard to defeat.

Anyway, lets rewind and look at Sueyoshi's career, rather than just his awkward style in the ring.

The Teiken fighter had a relatively short amateur career, going 21-8 (10) before making his professional debut in 2011, as a 20 year old. As an amateur his most notable achievement were fighting in national high school tournaments, but he didn't make much of a mark. there. That was despite seemingly being a natural at the sport, which he began to do in high school following several years of kick boxing and karate.