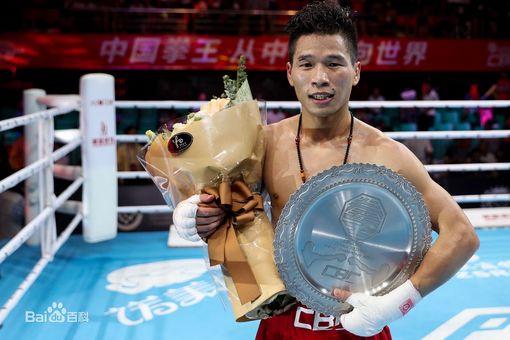 Since the early 00's we've seen a gradual growth in Chinese boxing, with Xiong Zhao Zhong leading the way before Zou Shiming gave the country's boxing scene a huge shot in the arm. Despite those two both becoming world champions neither man really set the world on fire, at least in the professional ranks, and even the top Chinese hopefuls are failing to really capture the public's attention. If we're being honest the most notably Chinese fighter in regards to an American fan base was the freakishly tall Taishan Dong, who was more of a freakshow act than a serious boxer.

Thankfully the future of Chinese boxing is looking brighter than many fans realise. The sport now has a form of a league in China, shows are becoming more and more regular and although Bob Arum might not have the involvement in the country had had once hoped for the Chinese scene is unearthing promising talent. The most promising of which is former amateur stand out Lu Bin (1-0, 1), who looks on the verge of becoming a major name in the professional ranks later this year.

Lu Bin's amateur record would seem incomplete, but there's still a lot of details that are available of his career in the unpaid ranks. He began boxing when he was just 12 years old in Jinan and began competing in regional tournaments the following year. His prodigious talent shone through his youth and in 2012, as a 17 year old, he reached the semi-final of the Chinese National Championships in Haikou.

Following the national tournament in 2012 Lu Bin was touted as one to watch and showed why at the 2012 AIBA Youth World Championships, going all the way to claim the 49KG crown. On route to the title the Chinese fighter defeated Cuban Andy Cruz in the quarter final excellent Indian fighter Lalitha Prasad Polipalli in the semi-final, after the Indian had eliminated Kosei Tanaka in the quarter-final, and Uzbek Muradzhon Akhmadaliyev in the final.

In 2013 Bin built on his reputation and claimed a number of the runner up spots. Those included coming second at Chinese National Championship as well as the Giraldo Cordova Cardin and Copa Roberto Balado, both in Cuba. He also reached the semi-final of the Asian Championships in Jordan, to claim a bronze medal, and won the Chinese National Games title in September. Sadly however he failed to shine at the World Championships in Kazakhstan, losing his second bout to Mohamed Flissi.

It'd be fair to say that 2014 was a mixed year for the Chinese youngster. He was one of the members of the WSB team “USA Knockouts”, he reached the semi-final of the Chemistry Cup, came runner up in the Giraldo Cordova Cardin tournament, for a second year running and won the China Open. Sadly however he was drawn against the incredible Hasanboy Dusmatov of Uzbekistan in the opening round of the Asian Games in Incheon, and was eliminated before he could show his talent. Despite the set back in Incheon he signed for the APB in 2014, and it was a tournament that was really his launch pad to becoming the fighter he is today.

To begin his APB campaign Bin defeated Kazakh Birzhan Zhakypov in a notable upset win. Zhakypov had won the 2013 World Amateur Championships and been one of the big favourites to make an impact in the APB but was unable to deal with the Chinese youngster who won with a score of 58-56 from all 3 judges. Just 4 weeks later Bin over-came fellow Chinese fighter Zhonglin Wu, with a dominant display. He would then over-come Mark Anthony Barriga, taking a split decision over the talented Filipino.

In 2015 Bin would finally win the APB Light Flyweight title, outpointing Zhonglin Wu in a rematch over 8 rounds. As the champion he would defend the title later that year over 12 rounds against Zhakypov, proving he had the stamina to go the longer distance. That was the crowning glory of the year for the youngster, who had earned his Olympic qualification and become big news in China, whilst also claiming a national title the same year.

To begin 2016 the focus for Bin did seem to be the Olympics, though that wasn't his only focus. Another focus was on proving he was the best fighter in China. He did that by defeating former world champion Xiong Zhao Zhong in a special bout set up by CCTV 5 as part of 1-off cross code event. The result was a 1-sided victory for Bin who showed up the professional fighter over 10 rounds to claim a title that CCTV5 had put together. Sadly for Bin that was about as good as it got for the year with the Chinese fighter being eliminated in his first bout of the Rio Olympics, losing a controversial decision to Kenyan fighter Peter Warui, and coming up short in a number of other international competitions.

Despite the poor 2016 Bin remained a top amateur with many wondering when, or if, he would turn professional. There had rumblings be remained an amateur as he went on to claim the Chinese National title in March 2017. In September he finally made his long awaited professional debut, and looked like a sensation as he stopped Chatchai Or Benjamas in 3 rounds to claim the WBC Asian Boxing Council Silver Light Flyweight title. It was an impressive debut and one that made some hardcore fans sit up and take note, hoping his intention was to become a full time professional. Sadly though he would then revert back to the amateur boxing scene, fighting in both true amatuer bouts and AIBA professional bouts.

As an amateur Bin would claim the 2018 Chinese National title and qualify for the Asian Games before it was ported that Bin would be fighting in his second professional bout.

Bin's return to the professional ranks is scheduled for this coming July as looks to create history and claim a professional world title in just his second bout, facing off with Carlos Canizales for the WBA Flyweight title. A win for Bin would see him claim a world title in fewer fights than any other man in history, breaking a joint record of Saensak Muangsurin and Vasyl Lomachneko, though it's a huge ask and Canizales is regarded as one of the best fighters at Light Flyweight.

For those who haven't seen Bin before he looks like a natural in the ring with amazing ring IQ, great speed, hurtful power and a real fluidity to his work. Despite being a young fighter he is physically mature, he throws some lovely combinations and is a very crisp and sharp puncher. Bin hits his targets with power, unlike Zou Shiming, and is a light on his toes, unlike Zhong. Despite his novice professional status he has already done 12 rounds in the APB and proven his stamina and is used to fighting without head gear. In many ways the APB series has helped refine Bin's style to that of an accomplished professional, even if his record doesn't show it.

Below we've included his bout with Zhong and his professional debut against Chatchai.