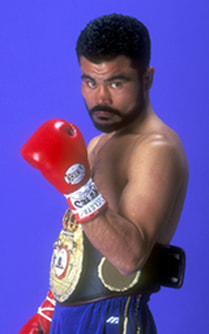 In Japanese boxing top amateur fighters are typically backed by a big gym, something like Teiken, Kyoei, Ohashi, Watanabe, Mutoh or Shinsei. They work with TV companies, and get financial backing for their succes, they get to build a connection with the fans through the gyms and TV and get pushed as promising hopefuls from the start of their career. That wasn't the case with the destructive Nobuaki Hiranaka, better known as Akinobu Hiranaka (20-2, 18). Who never signed with a leading gym, instead staying local and fighting out of a little known gym in Okinawa.

Hiranaka was born Nobuaki Hiranaka on November 14th 1963 and would be a genuine Japanese amateur standout. His success in the unpaid ranks lead to him running up an impressive record, reported as either 43-5 (37), as per the JPBA, or 67-9 (64), according to boxer-hiranaka.com. Either way he was a hard hitting amateur who made his way to the 1984 Olympics, losing in his first bout to Mexican fighter Genaro Leon, who would go on to reach the quarter final.

Following his amateur career Hiranaka would remain with a local gym whilst turning professional, and be fast tracked, with the fighter and his team believing in him and his god given power. He would debut in March 1985, in a special A license bout,and blow away his debut foe inside a round. That destruction continued and his first 3 professional bouts lasted a combined 7 rounds as his power blitzed opponents. Those early wins lead to him getting a Japanese Light Welterweight title fight less than 10 months after his debut.

Hiranaka's Japanese title fight saw him take on the then 9-1 Masahiro Tanabu, who was enjoying his second reign as the champion. Tanabu managed to show some toughness and withstood Hiranaka's power for a while whilst using his long arms to try and establish some distance between the two men. Sadly for Tanabu however he wasn't able to totally avoid Hiranaka's power and right on the bell to end round 6 Hiranaka would land a brutal right hand that send Tanabu down for the count. Officially Tanabu was counted out at 3:10 of round 6, as Hiranaka claimed his first title.