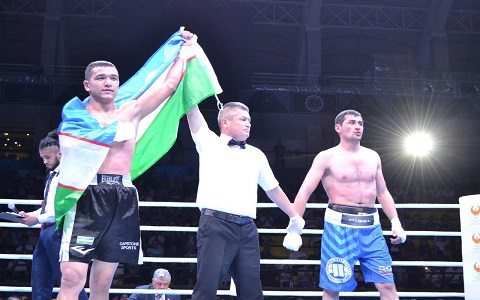 The amount of talent pouring out of Uzbekistan right now is genuinely scary. Not only are the prospects top class but they are also often very young, yet have strong amateur experience and act like fighters who want to be pushed early in their careers. They aren't fighters who are happy to toil against no hopers but are instead wanting to be pushed quickly and moved towards bigger and better fights.

One of the many prospects to come out of the Central Asian country in recent times is teenage sensation Ulugbek Sobirov (7-0, 5), who may well be the best teenage prospect in boxing today, and one of the many fighters from Uzbekistan that could end up becoming a major force on the world scene.

That began a year of brilliance from the younger who was unlucky to lose a close decision in March at the Nikolay Pavlyukov Youth Memorial, losing to eventual semi-finalist Bibert Tumenov, claiming a bronze at the Uzbek Youth Championships in September, competed at the Ahmet Comert Youth Tournament in October and then won the Abbas Agalarov Youth Memorial. It was clear that the Uzbek management saw him as one to watch way back in 2015, with him becoming a key figure in the youth team on the international stage.

Having made his mark on the Uzbek amateur youth team in 2015 Sobirov built on his momentum, and in May 2016 he would go on to win the Asian Youth Championship in Kazakhstan, where he was one of 3 Uzbek fighters to win gold. Not only did he take the gold medal, but he did so by beating local favourite Oleg Matveychuk in the final. That success helped take him to the 2016 World Junior Championships, though unfortunately he would run into Kazakh sensation Sadriddin Akhmedov and lose a decision to the Kazakh in one of the preliminary rounds.

In 2017 Sobirov moved up to the seniors and reached the quarter final of the Uzbek National Championships in November. That was to be his last notable amateur result and it wasn't long until he turned over, and began to fight as a professional fighter.
Sobirov would make his professional debut on January 7th 2018, hen he faced fellow debutant Alisher Sarimsakov from Kyrgyzstan. The bout, supposedly scheduled for 8 rounds, saw Sobirov see off his foe in round 2. Just 3 weeks later he would return to the ring, taking a 4 round decision over Adham Nazarov.

After having had his first two bouts in Uzbekistan Sobirov would then get his passport out and travel to indie, where he faced the then 4-0 Siddharth Ravindra Varma in a 6 rounder. The Indian was tough, going the 6 round distance, but was out boxed by Sobirov who claimed his third win in the space of just a few weeks. Having made his international debut Sobirov's next bout was also on the road, as he went to Malaysia and scored a 74 second blow out win over Hamis Mwakinyo from Tanzania. The limited Mwakinyo looked completely out gunned by the Uzbek who closed the show without the need to even break a sweat.

The win over Mwakinyo began a run of destruction for Sobirov, who would return to Uzbekistan this past May and stop Georgian fighter Giorgi Jincharadze in 2 rounds. That was a slightly more competitive contest, but was still awfully one sided with Sobirov hurting Jincharadze with vicious body shots that made him double over in agony. Interestingly Sobirov took more than 2 months out of the ring, before returning to action in the Philippines, where he score a 33 second blow out of the experienced Dennis Padua. Just weeks later Sobirov would resurface in Thailand, where he scored his 4th straight inside the distance win, defeating Theerawat Yoohanngoh.

Sobirov is pencilled in to fight against on September 9th, when he will face off with Filipino veteran Dondon Sultan in the Philippines. A win there will likely open the door to biggest and better fights for the Light Middleweight prospect, who looks very mature for a 19 year old and technically very solid.

Sadly footage of the last few bouts from Sobirov hasn't been made available, but given how he looked earlier in his career we really believe that Uzbekistan has a gem on it's hands with Sobirov, or more spastically another gem alongside the likes of Shakhram Giyasov and Murodjon Akhmadaliev. Soibirov is younger than many of his fellow Uzbek stand outs, but that really shouldn't go against him, as he does look like a genuine super talent, with an incredibly high ceiling.