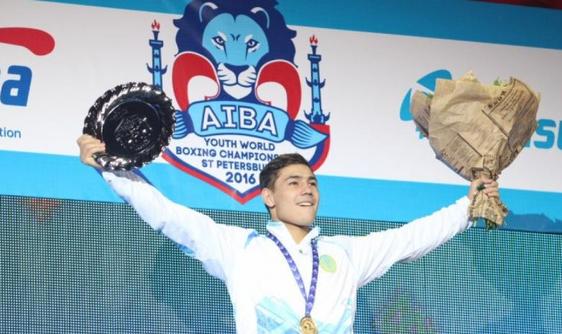 At the moment the face of Kazakh boxing is Middleweight king Gennady Golovkin, who isn't just the face of boxing from the oil rich Kazakhstan but also one of the global faces of boxing, and a man who will, in September, fight in one of the biggest bouts of 2018. At the age of 36 however Golovkin's career is certainly on the back end, and he may only have another few bouts left before he sails off into the sunset and retires. With that in mind it's worth noting that Kazakh boxing does live and die with Golovkin, and the country has a number diamonds in the ranks. One of those is 20 year old Sadriddin Akhmedov (3-0, 3) [Садриддин Алиханович Ахмедов] who looks likely to be one of the faces of the future for Kazakhstan, and more generally Central Asia.

Born in a small village in Kazakhstan, not Astana as often reported, Akhmedov was part of a large family with 4 brothers and 3 sisters. When he was a child he moved to Astana, picking up boxing after moving there. It didn't long for his mentors to see his natural talent and he would quickly win a number of small tournaments before joining the Kazakh national youth team. It was there that he really excelled with the training and belief of his coach at the time building his skills.

Sadly full details of his amateur background are hard to come by, but sources report that Akhmedov managed to fit over 250 bouts into his amateur career, winning well in excess of 200 of those bouts.

Whilst Akhmedov's full list of achievements are hard to come by it's known he made a mark domestically as early as 2013, when he reached the semi-final of the Kazakh Junior National Championships losing a close decision to Syrymgazy Ozganbayev. He built on that success the following year, claiming a tournament win at the Yakov Vysotskiy Junior Memorial in Yagodnoye, Russia.

As we often see with rising amateur stars success bred more success and in 2015 Akhmedov had a stellar year. In February he claimed the Kazakh Youth title, just weeks later he would reach the quarter-final of the Nikolay Pavlyukov Youth Memorial in Anapa, Russia, losing to eventual finalist Isami Mesa. In September Akhmedov would compete at the Brandenburg Youth Cup, clashing with eventual winner Silvio Schierle in the quarter finals before winning the coveted Ahmet Comert Youth Tournament in October and then losing in the semi-final of the Abbas Agalarov Youth Memorial to Ulugbek Sobirov.