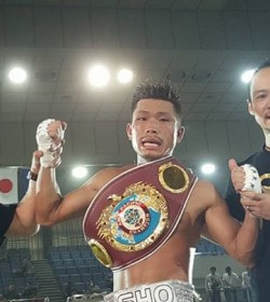 In 2017 we saw a number of Asian fighters announce themselves on the world stage. Some of those fighters were expected to make a name for themselves, fighters like Hiroto Kyoguchi and Jerwin Ancajas, others were merely climbing back up to the top, such as Srisaket Sor Rungvisai. There was also the bizarre case of Sho Kimura (16-1-2, 9) who seemed to come out of nowhere to become one of the great success stories of the year and a man who really shook up the Flyweight division with two genuinely big wins over world class veterans.

Kimura began boxing as a child at a local gym when he was a child but never seemed to do much in the unpaid ranks, with no clear reports on any success or amateur record. That's not to say he didn't fight as an amateur, but his amateur background has certainly not been widely reported and he certainly didn't have any major success as a fighter before turning professional in 2013.

Debuting at the age of 24 Kimura was a relatively old debutant for someone without much of an amateur background. Sadly for Kimura he wasn't just old when he debuted but also looked out of place in the ring, losing in just 75 seconds to fellow debutant Shosuke Oji. The loss was one that didn't bode well for Kimura's future, though strangely Oji would never actually have a second fight and his potential appears to have been lost in the sport, despite a notable debut win.
​

Kimura's desire was clear and just 3 months after his debut he bounced back with a decision win over Akira Kokubo. He would then second his second win as he out pointed Ryo Irie and moved to 2-1 to end 2013.

Having got his career going with back to back wins, following his disastrous debut, Kimura made his international debut, kicking off 2014 with a bout in Nakhon Ratchasima, Thailand, against Rungkeat Sithsaithong. The bout saw Kimura score his third straight win before returning to Japan to out point Katsunori Shimooki just a few weeks later. Kimura's activity would remain bust through the year with a subsequent wins over Yuma Kudo and a draw in a rematch against Kokubo to end the year with a record of 5-1-1.
he draw with Kokubo was followed by a draw against Isao Aoyama as Kimura's moment seemed to stop. The bout with Aoyama was Kimura's first over the 6 round distance and the under-rated Aoyama, who had reached the 2011 Rookie of the Year final, and was a real slugfest that saw neither man ever really establishing themselves as the dominant force in. Despite drawing the bout gave fans a chance to see glimpses of the fighter that Kimura would become, a raw, tough and powerful warrior who comes to fight and refuses to accept a loss.

Having had back to back draws to end 2014 and start 2015 Kimura likely knew he was going to have to improve and showed some of those improvements in May 2015, when he defeated Tomoyuki Kaneko and began to look more and more confident in the ring, as if he was starting to truly believe in himself. That belief followed him, and he fought for a second time in Thailand, where stopped Saichon Or Ounsuwon in Bangkok in July 2015. It was Kimura's first stoppage win but was quickly followed up by stoppages against Ryo Narizuka and Naoki Shoda.

To end 2015 Kimura was 9-1-2 (3), he had scored 3 straight stoppages and was an A class fighter in Japan, having earned the A class license. The moment he had built in late 2015 rolled into 2016, a year that really saw Japanese fans take notice of him, for possible the first time. He would begin the year by stopping the usually durable Takayuki Teraji in 3 rounds then follow that up with a stoppage against Yamato Uchinono before destroying Thiraphong Phaepho inside a round as he returned to Bangkok. That stoppage was Kimura's 6th straight stoppage win and he looked a million miles from the main who failed to score a stoppage in any of his first 9 bouts.