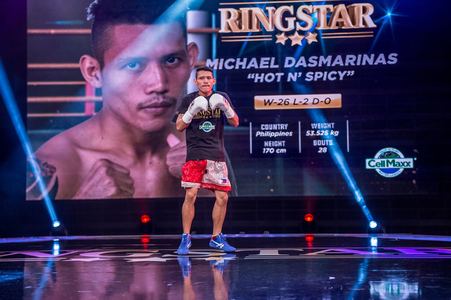 The Filipino boxing scene is full of fighters who have not had the media exposure that their talents deserve. As a result it means there are a lot of hidden gems in Filipino boxing. Some of those gems get the opportunities to rise, get the big fighters and are able to make a name for themselves through hard work, and scoring upsets on the road. Others are picked up by major promoters and guided that way whilst others are left by the way side and almost forgotten about, or used in such a way that by the time they are mature fighters their potential has already gone to waste.

One fighter who seems to have gotten himself signed by a notable promoter is Bantamweight hopeful Michael Dasmarinas (27-2, 18) who already has an accomplished record despite only being 25 years old.

The reason Dasmarinas has had so many fights at such a young age is that he turned professional more than 6 years ago, as a 19 year old. Details of his amateur career are scarce, but he has been boxing since he was a small child, and was guided by another boxer in the family, his cousin. Despite the support from his cousin he was told he wouldn't make it as a boxer, his frame said to be too thin and frail for the sport.

That early negativity seems to have acted as a driving force for Dasmarinas who has clearly proven his early doubters wrong whilst making a name for himself as one of the Bantamweight division's dark horses.

Although currently a Bantamweight Dasmarias did have a lanky and thin frame when he started fighting, making his professional debut as a wiry looking Light Flyweight back in January 2012. After taking a unanimous decision on his debut he would return as a Flyweight just a month later and score his first stoppage, 8 days later came another win as Dasmarinas was kept active early on.

With 3 wins under his belt Dasmarinas would take on another unbeaten youngster in April 2012. Sadly for Dasmarinas he would be stopped by the limited by heavy handed Marbon Bodiongan, who stopped him in 2 rounds to give Dasmarinas his first professional loss. Amazingly the loss didn't really slow down Dasmarinas' activity and he would somehow cram in 5 more wins before the end of 2012.
Having been a professional for a year Dasmarinas would begin 2013 with an impressive looking record of 8-1 (4). That record would increase drastically as Dasmarinas would have another busy year, scoring 6 more wins. Those wins weren't huge ones but included a couple of 10 round decisions, showing he had the stamina for the 10 round distance that early in his career. Sadly his team didn't manage to get him any early title fights but they were clearly preparing him for big things with such a high activity level.

Dasmarinas's preparation, and skills, would show themselves really well in 2014. After a couple of easy wins at home he took part in his first bout on foreign soil, travelling to Tokyo to battle former Korean Super Flyweight champion Hayato Kimura. The bout saw Dasmarinas shine as he out moved, out sped, out boxed and out skilled Kimura to score a clear decision over the Japanese fighter. That win really opened up a lot of eyes in Japan and many in the country realised that he was a proper talent, a talent that would return regularly since to act as a sparring partner for the likes of Shinsuke Yamanaka.

The win over Kimura was followed by another at home, against Oscar Raknafa, before Dasmarinas got his second bout outside of the Philippines. This time it would be in South Africa against against Lwandile Sityatha for the IBO Super Flyweight title. Sadly for Dasmarinas he would be the next in a long line of Filipino fighters to suffer a loss in South Africa, with Sityatha taking a very debatable split decision win. The loss was Dasmarinas's second, but was one that could well have gone his way.

Only weeks after the loss to Sityatha fans had the chance to see Dasmarinas return to a Filipino ring, where he blasted out Aroel Romasasa in a 51 second cameo. That win kicked off a quiet, yet impressive, year for Dasmarinas who would stop Roy Lagrada soon afterwards before out pointing the then unbeaten Jhaleel Payao for the WBC Youth Super Flyweight title. That title would be the first of Dasmarinas' career and finally gave him a chance to have something tangible for his achievements in the ring. He would later defend that title in China, stopping Wisanlek Sithsaithong inside a round to end 2015 as a champion.

In 2016 Dasmarinas claimed his second title, the PBF Bantamweight title. He first won the interim belt, when he stopped Edison Berwela in March before picking up the full title a month later with a win over Jecker Buhawe. Strangely he would fight only once more that year, defeating Michael Escobia in September.

Amazingly Dasmarinas would then take an 11 month break between fights, the longest break his career by far, before returning in August 2017 to face Mateo Handig, who was stopped in 8 rounds. Despite the inactivity Dasmarinas wasn't wasting his time, instead he training hard, spending time sparring with top Japanese fighters and rounding off his skills whilst gaining vale experience in the gym.

To end 2017 Dasmarinas fought away from home again, travelling to Singapore to defeat hapless Thai Phupha Por Nobnom in 2 rounds. That win has begun the newest chapter in Dasmarinas' career and he has now inked a multi-year deal with Singapore's Ringstar promotions. It'll be under Ringstar that the Filipino will face former European Bantamweight champion Karim Guerfi for the IBO title on April 20th and a win over the Frenchman could well open the doors to a potential WBC world title fight.

As a fighter Dasmarinas is a razor sharp southpaw with lovely movement and speed,he has under-rated power and looks huge at Bantamweight. He has a lovely variety of of punches, switches between head and body brilliantly and looks like a potential star for the future. He has got some question marks over his chin but almost every other box has been ticked.