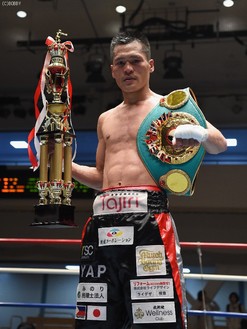 In boxing a fighter is often judged by their record, the numbers being used to judge a fighter more than the context of the records, the skills of the fighter or the development of the fighter. Sometimes the numbers suggest a fighter is fantastic, with a long string of wins, though the reality is that their competition has been questionable at best, whilst other fighters have losses through their records and are regarded as less capable.

One of those fighters who's record says they perhaps aren't that good is Mark John Yap (29-12, 14), however the 29 year old Japanese based Filipino is much, much better than the numbers suggest, and is a fighter who is in the form of his career. Not only is he in good form but he's a settled fighter, managing to focus on his job as a fighter and get fair notice of his fights. He maybe dubbed “The Journey Man” but right now he's a settled fighter and his journey is to a world title.

Born in early 1989 in Misamis Oriental, in the Philippines Yap would make his debut a day before his 18th birthday. On his debut he stopped Julius Cabusas in Borbon and kicked off a very busy 2017, with 7 fights during the year. Those 7 fights would all be wins for Yap, and would see him quickly progress from 4 round bouts to 8 rounders, proving he had the energy to go the 8 round distance. In some ways however Yap's ability was a problem, as he was fighting from just over the Light Flyweight limit to Super Bantamweight.

Having moved into 10 round bouts in early 2008 Yap would lose his unbeaten record, losing in back to back bouts to Carlo Magali, a man who would later go on to claim the OPBF Super Featherweight title. Those losses meant that Yap ended 2008 with a record of 10-2 (4), having bounced back from the losses to Magali by stopping two local foes. That stoppage run continued in 2009 with two more stoppages, including a notable one over former 2-time world title challenger Pramuansak Posuwan, who injured his leg in the bout and was forced to retire from the bout.

Yap's career would run in to problems in 2010, with the Filipino suffering a stoppage loss to Jessie Albaracin and then being out pointed in Japan by Hiromasa Ohashi and then returning to the Philippines and losing to Richard Betos, ending the year with back to back losses. The troubles for Yap continued through 2011 with Yap suffering losses to Kenichi Yamaguchi and Ronnie Apilado.

By the start of 2012 Yap's record had collapsed from 10-2 (4) to 16-7 (9). He had gone from a promising fighter to a fighter struggling through the domestic scene. Those struggles eased off slightly in 2012, when Yap scored his first win on international soil, defeating Akihiro Matsumoto in Kanazawa, but he would suffer another loss as he came up short against Miniyakhe Sityatha in South Africa.

In 2013 Yap began being a regular visitor to Japan for fights, though would begin to pick up more losses, losing to Ryosuke Iwasa and Naoto Uebayashi in 2013 and then losing to Hirofumi Mukai and Yuta Uetani in 2014. The loss to Uetani saw Yap suffer his second stoppage defeat and his record would fall to a rather dire looking 19-12 (10). Despite only being 26 years old he looked like a man who's hard career had taken it's toll on his body.

Despite the string of losses Yap would sign up with the Mutoh gym in Osaka, it would be a decision that would help reignite his career. To begin 2015 Yap would upset the previously unbeaten Tatsuya Ikemizu, who had been touted as one to watch and was ranked by the JBC going into the bout. Yap would continue his success by defeating former world title challenger Juan Jose Landaeta less than 2 months later. Wins over Shun Ishibashi and Hiroyuki Kudaka, then fighting as Hiroyuki Hisataka, would see Yap go 4-0 for the year, and suddenly he was looking like a fighter having a mid-career resurgence. That winning mentality stuck when he won a rematch with Kudaka in 2016 before getting a career changing bout with OPBF Bantamweight champion Takahiro Yamamoto.

Coming in to the bout Yamamoto had made 2 defenses of the title, had looked incredibly destructive whilst running up an 18-4 (15) record and was on the verge of an IBF world title eliminator, having been ranked #4 going in to the bout. That however didn't help Yamamoto as Yap had set a great gameplan, knew his opponent's flaws and scored 3 knockdown's in round 5 to rip the title from Yamamoto.

Yap's first bout following his title win was a stay busy bout against Ninmongkol Phetphumgym before he made his first defense in July 2017. That defense came against former 2-time Japanese Bantamweight champion Kentaro Masuda. The bout saw Masuda have the perfect opening round, dropping Yap 3 times, but the champion's heart kept him in the fight. Despite the horror start to the bout Yap recovered and would stop Masuda in the 4th round to record his first defense. He would record his second defense by stopping Seizo Kono later that year.

Moving in to 2018 Yap had run up a 9 fight winning run and was heading up the world rankings. His career had completely turned around and he was now a fighter looking like he was a true contender, with the losses to Uetani and Uebayashi almost being forgotten due to the run Yap was on. That run continued earlier this month when he recorded a decision win over Japanese veteran Takafumi Nakajima to record his third defense of the OPBF title.

As a fighter Yap is a man who is still improving. He's still got some rough edged, despite having had 41 professional bouts, but is aware of those mistakes and is constantly trying to improve him, with the bout against Masuda being a huge learning experience. His will to win is impressive, his power is under-rated and he has solid skills with good stamina.

Although he's yet to fight at world level Yap has had a lot of high level training, and has trained along the likes of Hozumi Hasegawa and Srisaket Sor Rungvisai, with Yap sparring with Srisaket earlier this year. That level of training will only help as Yap continues to prepare to get a world title fight, which is expected later this year. At the time of writing Yap is ranked in the top 10 by both the WBC and the IBF and with the the division currently is his team will be pushing hard for him to get a shot at one of those two titles in the very near future.