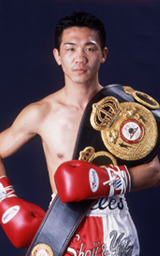 One of the many faces that Western fight fans who follow the Japanese scene will see a lot of, but may not recognise them, or their face, is former fighter Celes Kobayashi (24-5-3, 14). He may not be one of the biggest names of the Japanese scene but he is regularly featured in a TV role for the likes of G+ and in the past NTV. He also runs a gym and the mentor for the likes of Ryosuke Iwasa at the Celes Gym. Prior to his current roles, as a owner and a commentator, he was a pretty notable fighter in the lower weights, and a great example of what happens when you build from set backs.

Shoji Kobayashi was born in Ibaragi in February 1973, he would later change his name to Celes, taking the name of his employers and following the custom of the International boxing sports gym, which saw fighters taking adoptive first names. This saw him following the likes of Royal Kobayashi, Trash Nakanuma and his mentor Leopard Tamakuma, a former WBA Flyweight champion.