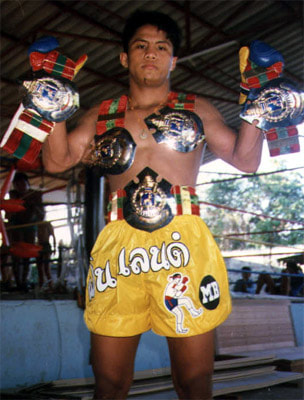 Every so often a fighter comes around at the wrong time. Had they been around at any other time in history they would have been a world champion, but they era they ended up in was smack bang in the era of divisional greats. One of the most obvious examples of that was Kongtoranee Payakaroon (12-2, 9) [ก้องธรณี พยัคฆ์อรุณ], who fought in two world title fights to two of the very best the Super Flyweight division has ever had. Those were only two losses in professional boxing and came after a stellar career in Muay Thai.

Born in 1960 in Chachoengsao province, Thailand Kongtoranee would pick up Muay Thai at a very young age though was a natural to the sport.

In Muay Thai he was would become a star when he was just a teenager, fighting under the promotion of Songchai Rattanasuban, along with Kongtoranee's brother Samart Payakaroon. As a fighter he wasn't just good, he was really good, and would become a 5-weight champion in Muay Thai at the Limpinee Stadium, claiming the championships at 102lbs, 108lbs, 112lbs, 115lbs and 118lbs. During this he was paid up to 120,000 baht, a huge sum for a Muay Thai fighter.

In the mid 1980's, having proven how good he was in Muay Thai, he transition to professional boxing and made his debut on February 8th 1985. As with most top fighters to come from Thai boxing he was matched tough from the off, being thrown in with Filipino Super Flyweight champion Ruben De La Cruz on debut. De la Cruz would last 10 rounds with Kongtoranee, but the Thai would pick up a very impressive debut win.

Less than 2 months later Kongtoranee would pick up an even bigger win, defeating former WBC Super Flyweight champion Payao Poontarat over 10 rounds. Payao had only lost the WBC title 9 months earlier to Jiro Watanabe, who had twice beaten Payao, so for Kongtoranee to claim such a big so earlier in his career was a serious statement to the boxing world, and proof that Kongtoranee was an incredible boxing talent.

After such an incredible start to his professional boxing career he would actually step down in quality, defeating Vibul Kiatsoros just 2 months after the win over Payao. It seemed like they were wanting to get Kongtoranee some ring time before facing too many stiff tests. Vibul was stopped in 2 rounds, and former Japanese Light Flyweight champion Kentoku Nakama only lasted a round longer, being stopped in the third round. Amazingly Kongtoranee managed to fit one more bout intp the year, stopping Joseph Ladepi in November.