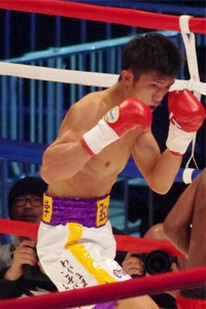 The Ohashi gym is one of the most notable in Japan right now and has a number of world class fighters as well as a number of fighters on their way up. One of the most notable of those heading upwards is the unbeaten southpaw Koki Inoue (7-0, 6), the cousin of 2-weight world champion Naoya Inoue and world title contender Takuma Inoue. Like his cousin's he's trained by Shingo Inoue and is tipped as a really exciting and promising fighter who is using a long amateur background to help him rise through the professional ranks in a speedy fashion.

Born in May 1992 Inoue made his first mark in the amateur ranks, where he ran up an excellent 112-18 (60) record and won 5 amateur titles in Japan. It was that level of amateur background, along with his connections to Naoya and Takuma, that helped many fans in Japan get so excited about his potential ahead of his professional debut.

As a professional Koki Inoue made his debut as a B class fighter in December 2015, when he blew away Indonesian foe Jackson Koel Lapie in 164 seconds. It wasn't a bout that got huge attention but it was a performance that convinced Mr Ohashi, and the rest of the team around Inoue, that they had another potentially brilliant talent on their hands.

Just 3 months later Inoue recorded his second win, stopping Wuttichok Injun in less than a minute, then added another blowout in May 2016 against Bima Prakosa, a second Indonesian foe.

​After 3 bouts, and 3 quick blow outs it was clear that Inoue needed a big step up in class a genuine test. That finally came in June 2016, when he travelled to Korea to take on the big punching Hyun Woo Yuh, then 5-1 (5). Against Yuh we saw Inoue battle someone willing to have a fight with him, and it brought the best out of Inoue, who had to show some guts himself, before his skills, power and speed began to wear down Yuh. The Korean was down and hurt several times, but gritted his teeth to see out the 6 rounds, en route to a clear but hard fought win for Yuh.

Less than 3 months after beating Yuh we saw Inoue return to the ring to take on Indonesian veteran Heri Andriyanto, who was fighting in his 47th bout. Andriyanto had proven his toughness in the past but the 29 year old was happy to escape from Inoue, and took a 2nd round TKO loss, whilst putting up a very poor effort. The Indonesian, who had only been stopped 6 times previous, was latter suspended by the JBC for his lack of effort, though it seemed clear that he knew he was over-matched and happily took the quickest route out of there.

In December 2016, just over a year after his debut, Inoue took another step up in class as he battled former OPBF Lightweight title challenger Futoshi Usami in a bout scheduled for 8 round. The bout looked like a credible step up for the fighter from Kanagawa but proved to be a bit of a mismatch, with Usami coming to fight but being ground down, in part due Inoue's brutal uppercutts and ferocious aggression, before being stopped in round 3.

In his first fight of 2016 Inoue took another step up in class as he took on fellow southpaw Mitsuyoshi Fujita. Coming in to that fight Fujita had won his previous 8 bouts and had began to move into the rankings himself. Despite the confidence Fujita took into the bout he too was ground ground down, following some brutal uppercuts. Fujita's resistance had seen him survive until round 5, when Yuji Fukuchi had finally seen enough to call a halt to the beating.

Unlike his cousins Koki isn't a smaller fighter. Instead he's a Light Welterweight and has made it clear that he's looking for title fights later in the year. Given his pedigree, style and power there is real excitement in Japan about his future. At the moment he does look a little bit wild but it does seem like some of his wildness is down to his contempt of his opponents rather than a lack of ability to fight calmly, something we have seen him down when he's needed to.

At the moment we're expecting to see Inoue back in the ring in late June and if he wins then it's likely that his team will push him for a title fight later in the year, depending on how the Japanese, OPBF and WBO Asia Pacific title situations look in September or December.

(Image courtesy of the Ohashi Gym)