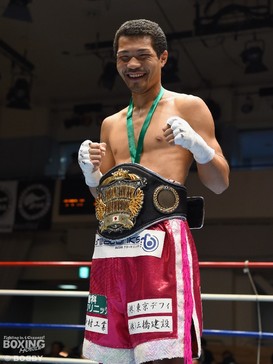 As boxing fans we are typically attracted to fighters who enjoy a fight. Whilst some of us do appreciate the more patient fighter rather than brawlers it's still the blood and guts warriors that will always get the juices flowing and will always excite fans. The problem with those warrior type fighters is their career are often a bit short, they tend to burn bright but not for long.

One fight we suspect will have an unfortunately short career, but a genuinely thrilling one, is Japan's Kenya Yamashita (12-4, 9) who is only 22 years old but has been in some all action bouts and has a reputation as a youngster who is always worth a watch. Despite the fact he has come up short against his most notable opponents.

Yamashita would turn professional at the age of 17 with no notable amateur experience. He would make his debut as a Koguchi Gym fighter, signing with the same gym that had Shingo Wake. The two seemed to strike up a quick bond with Wake seemingly acting as Yamashita's mentor for the early part of his career, with the two often hanging out together outside of the ring as well as in the gym.

On debut, back in December 2013, the then 17 year old Yamanshita scored a 3rd round TKO win over Kazuma Fukino. Despite being so young Yamashita looked exciting, talented and explosive, with the youngster trapping Fukino in the neutral corner and unloading until the referee saved the dazed and downed Fukino from further punishment. The relationship with Wake was clear after the fight, with the then OPBF Super Bantamweight champion celebrating with his young stablemate.

Despite debuting in 2013 it was really in 2014 that he came to the fore. He began the year by wiping pout Norris Yano in 148 seconds, taking Yano down in the neutral corner much like he had with Fukino, and would finish the year as the All-Japan Flyweight Rookie of the Year.

The Yano was a preliminary Rookie of the Year bout. In Yamashita's second bout in the competition he he was pushed all the way by Tatsuji Kakumoto, with Yamashita just doing enough for a razor thin split decision, with the judges all turning in 39-38, scorecards. The split decision win seemed to act like a wake up call to Yamamashita who scored a knockout of Katsunori Shimooki in next book, with Shimooki being counted out at 3:05 of round 4.

Yamashita's final preliminary contest in the Rookie of the Year saw him risk his 4-0 (3) record against the then 4-0 (2) Takunari Yokoyama. The two men fought toe-to-toe, exchanging some sensational shots up close in an all action contest. That was until Yokoyama's resistance ended and the referee stepped in to stop the action, with Yokoyama looking wobbly legged at the time. That win put Yamashita in to the East Japan Rookie of the Year final, where he faced off against Sonin Nihei. Nihei was 5-0-1 and proven his quality by reaching the East Japan Rookie of the Year final. The two men would prove to be brilliantly matched, with Yamashita's aggression being just enough to earn the decision, though it was another close contest with the judges struggling to split the two men.