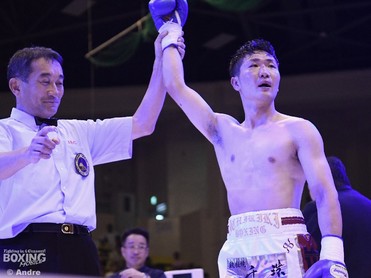 Whilst many fight fans may focus on world champions and world level contenders we also know there is a large chunk of fans who watch boxing to see a fight, and fighters who can assure fans of an action packed bout are worth following. Win or lose fighters like Arturo Gatti and Mickey Ward were always worth watching, and would almost always deliver, no matter who the opponent was. Right now Japan has a number of fighters who are always worth tuning in to, one of those is Keita Kurihara (12-5, 11) [栗原慶太] who matches an action style with vicious power and a desire to excite fans.

The 25 year old from Ichiriki boxing gym was originally not that interested in boxing but took it when he stopped playing baseball. As a result there isn't really any amateur pedigree to speak of with Kurihara who made his debut in 2011 at the age of 18. Since then he has proven to be thrilling to watch, brutally heavy handed and willing to jump in with tough opponents, almost as if he knows losing can help develop his skills

Kurihara would make his debut in April 2011 and take out Yoshiyuki Shimizu inside the opening round. Just over 6 months later he would score his second win, defeating Yohei Suzuki in 4 rounds. Sadly the good start wasn't too last and in January 2012 he was out pointed Koya Sato before being stopped 6 months later by Takahiro Fuji. A win in November 2012 over Takuma Okada saw Kurihara prevent the year being a total write off, but he didn't fight at all in 2013 meaning he couldn't build on the win over Okada.

After staying away from the ring for the entire of 2013 Kurihara would return to action in March 2014 and suffer a 4 round decision loss on his return to Shiji Ebisawa before being blown out himself in 52 seconds by Hiroyasu Shiga.