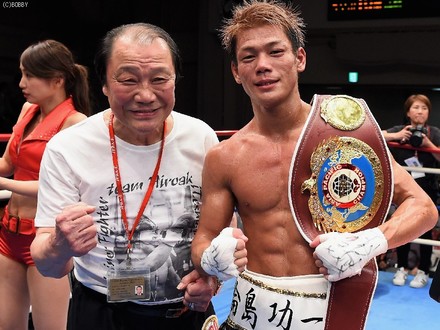 The Japanese boxing scene is full of exciting fighters, some of those will make their mark on the world stage whilst others will fall short. Part of the enjoyment in following those fighters is the action they give us inside the ring and following their pursuit of glory. One of the fighters who is always a joy to watch is Hiroaki Teshigawara (16-2-2, 9), who may not have the name recognition of some contemporaries but is among the most exciting Japanese Bantamweights out there. He's a fighter who began to attract attention from tans several years ago, but due to injuries has had a stop-start rise through the ranks. Those injuries are now seemingly taken care of and in 2016 and 2017 he has really attracted a lot more attention.

Teshigawara, like many Japanese boxers, was inspired by a fighter from the past, in his case Koichi Wajima and his book "Honō no champion". Having been inspired by Wajima Teshigawara would later join the gym that Wajima runs, and become a student of the former world champion.

Having trained for a while Teshigawara would make his professional debut in July 2011, just a month after his 21st birthday. He would win his debut with a 3rd round TKO over fellow debutant Naoto Tabata and would record his second win just 4 months later, stopping Shogo Sumitomo in 2 rounds to end the year 2-0 (2).

In 2012 Teshigawara entered the Rookie of the Year competition, competing in the East Japan part of the competition. He would narrowly over-come Yuto Sasamori in his first tournament bout, and then scrape through past Yoshito Ikari, on the dominant point rule. He would then go on to win two more bouts in the competition before losing in the East Japan final to Yusuke Tachikawa. Despite the loss Teshigawara had impressed and fans at the Korakuen Hall were starting to take notice of the raw but exciting and aggressive youngster.
Teshigawara would begin 2013 by fighting in 6 rounders, defeating Ryosuke Ono by decision in his first bout of the year. The win over Ono would be followed by a stoppage win over Kyosuke Sawada and then a decision win over Kota Sato to end the year 8-1-1 (4) and move on to a class A tournament final.

Sadly for Teshigawara his 2014 was almost a write off. He had been scheduled to face Yuta Nakagawa, who currently fights as Mugicha Nakagawa, in January in what would have been the aforementioned Class A tournament final, but the bout was cancelled due to Teshigawara needing to pull out of the bout. He would then be out of the ring until December. On his return he impressed and showed no signs of ring rust as he stepped into his first 8 rounder and defeated Gaku Aikawa with a dominant 8 round unanimous decision.

The following July Teshigawara stepped up massively to take on Hideo Sakamoto. At that point Sakamoto was the JBC #4 ranked Bantamweight and had been on a great run with 6 straight wins over the likes of Kazuyoshi Niki, Hiroki Shiino and Ryoichi Tamura. Teshigawara was supposed to lose but hadn't read the script and gave Sakamoto fits whilst scoring a shock draw. That was followed up later that same year with a 7th round TKO win against the JBC ranked Shuji Hamada. That win over Hamada saw Teshigawara break into the rankings himself, and have something to lose as we moved into 2016.

With a ranking to his name Teshigawara made a statement to begin 2016, stopping Kenichi Watanabe in just 82 seconds. He would then go on to beat Yoshihiro Utsumi in a tough, character building win. Sadly though Teshigawara would end 2016 by suffering his second defeat, losing a narrow decision in a tremendous bout against Ryo Akaho. The bout with Akaho, in October 2016, saw Teshigawara start brilliantly but slow down late on as Akaho took a 10 round split decision. Despite the loss the performance saw many fans take notice of Teshigawara, partly due to the fact the bout was available over the A-sign service, and worth of mouth did lead to increase fan interest in the slugger.

With the Akaho bout behind him Teshigawara seemed to find a new confidence in 2017. He started the year by blowing away Filipino Junny Saogaol before engaging in a thrilling 5 round war with Keita Kurihara. The bout with Kurihara was an intense, action packed slugfest between two men looking to prove they were the tougher man and the bigger puncher, with eventually Kurihara unravelling.

Teshigawara would get his first career title bout following the win over Kurihara, with the Japanese fighter taking on WBO Asia Pacific Bantamweight champion Jetro Pabustan of the Philippines, in October 2017. Pabustan, who had previously fought for a world title, had never been stopped and was an ugly fighter who was regularly involved in bouts with head clashes, having been in 13 technical decision. Despite Pabustan's reputation as a tough guy Teshigawara wasn't going to be denied and eventually broke down the Filipino, forcing the referee to stop the bout in round 10.

Less than 4 months after winning the WBO Asia Pacific title Teshigawara would make his first defense, and would be involved in another barn burner, as he battled against Jason Canoy. The bout would be a 12 round war with Teshigawara just coming out on top to record his first defense. The fight with Canoy saw both men needing to prove their toughness in a real back and forth that is very much worthy of a watch.

At the time of writing Teshigawara is preparing for his second defense, which will see him take on former 2-time world title challenger Teiru Kinoshita. This bout is scheduled for June 14th at the Korakuen Hall and could see Teshigawara push on towards a world title fight. Going in to that bout Teshigawara is ranked by the WBO and will know there are options out there for him, if he can shine against Kobe man.

For those who haven't seen Teshigawara he is very much a rough around the edges brawler. He has incredible confidence in his power and toughness and will look to make every fight a war. He can box, and has got good boxing skills, but does appear more willing to engage in a grinding war than a technical chess match. The style has endeared him to fight fans in Tokyo and will likely be what he continues to use as his profile continues to grow, and his team continue to get him notable bouts.