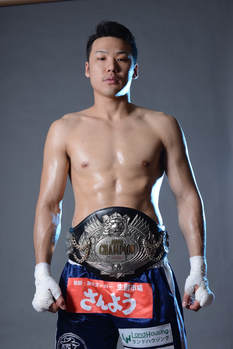 At the moment Japan has a rare international success at Middleweight, with Ryota Murata holding the WBA “regular” Middleweight title. It's a great achievement for a Japanese fighter at 160lbs though sadly there is no real depth to the division domestically, and the next best Japanese Middleweight is domestic champion Kazuto Takesako (9-0, 9) [竹迫司登], who won domestic gold this year and already looks like he's set for a brilliantly exciting career.

Like many notable Japanese prospects Takesako is a product of the domestic amateur scene. Unlike a lot of fast tracked fighters his record in the unpaid ranks didn't make for amazing reading, with Takesako running up a 30-11 record. Despite the less than outstanding record he did reach the final in both the 2012 and 2013 National Athletic meetings and seemed to be fully aware that his style was more suited to professional boxing than amateur boxing.

As an amateur Takesako was fighting in Osaka but as a professional he is fighting out of the World Sport Boxing gym in Tokyo. That was based on the advice of Nobuhiro Ishida, who acted as a mentor to Takesako when he was an amateur. Before turning professional Ishida advised Takesako that Kansai didn't have great sparring for bigger fighters, and that Tokyo would be a better option for someone of Takesako's style. It was also through Ishida that Takesako would be introduced to his trainer at the World Sports Boxing gym.

Given his amateur background there was some genuine excitement about Takesako's debut and World Sport Boxing gym helped fuel that excitement by entering him into a B Class Light Middleweight tournament in July 2015. His first bout as a professional saw him share the ring with the then 5-3 (2) Tomoyuki Yokota and it was quickly apparent that Takesako was a genuine prospect, as he stopped Yokota in the second round, and progressed into the B class final. That final would see Takesako face off with Colombian born Japanese based puncher Elfelos Vega, who was then 5-1 (3) and had never been stopped. Takesako would change that in just 92 seconds, as he dropped his man, then forced a stoppage afterwards.

Having scored two really solid wins to begin his career as a professional Takesako would face his first international opponent, facing off with Thai foe Sirisak Pimpasit in April 2016. The Thai would last just 87 seconds as Takesako dropped his man twice with power shots. It was a good way to keep off the new year, though a frustrating one as he had been inactive almost 7 months leading into this contest and would likely have wanted a bit more of a work out.

Thankfully Takesako finally got a bit of a work out in his fourth professional bout, with Hiroshi Ohashi showing some resiliency, though was stopped early in round 3. Following that bout Takesako begin to eye up potential title bouts, and suggested challenging the OPBF Light Middleweight champion Takayuki Hosokawa. Despite wanting to fight Hosokawa Takesako's team couldn't secure the bout and instead Takesako would face off with Korean Kyung Joon Ahn, in November 2016. On paper Ahn posed a really interesting test for Takesako, with the Korean having a reputation as a flawed but dangerous puncher, and if he landed on Takesako there was a chance he could put the Japanese novice down. As a result we ended up with a rather exciting fight, until Takesako's power broke through and he ended up stopping Ahn part way through round 3, as he continued his march towards his first title.