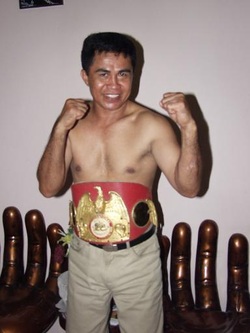 Photo by Boxing Bob Newman
If you talk to a modern day boxing fan about Indonesia one name stands out. Chris John. It may have to believe it however but Chris John isn't the first world champion from Indonesia, in fact "The Dragon" is the 3rd Indonesian to have claimed a world title.

The first Indonesian to claim a world title was the long forgotten Ellyas Pical (20-5-1, 11), a man who was a 3-time world champion and one of the most stunning punchers in Super Flyweight history. In fatc it was due to his powerful left hand that Pical was later dubbed "the Exocet" after the rockets the British had been using in the Falklands war.

Pical was born in 1960 in the tiny village of Ullath on the Indonesian island of Saparua. Due to the area of Saparua, Pical became a pearl diver collecting pearls from the near by seas.

Pical had picked up the sport of boxing in his teens after seeing Muhammad Ali on Indonesian channel TVRI.

The first time Pical appeared on the boxing map was in 1980 when, as an amateur, he competed at the 3rd President's Cup in Jakarta. Pical's skills showed through back then as the young fighter claimed the Gold medal in the 51KG division, a weight class that appears to have also had Kim Ji-Won involved in it.

Although Americo came up short against Mamby he had effectively put Indonesia on the boxing map.