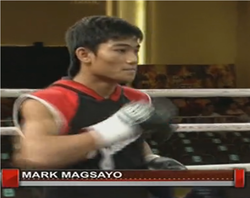 Filipino prospects seem to be on a conveyor belt in recent years with the country continually developing fantastic fighters. One that has slipped under-the-radar internationally however is teenager Mark Magsayo (12-0, 10) who despite being a professional novice is tipped to become something very special under the guidance of ALA Promotions.

Magsayo began boxing when he was just 8 years old and by the time he had turned professional he had fought in around 200 amateur contests.

Although we're unaware of Magsayo's full amateur record what we do know is that he was 4-time champion at the annual Amateur Boxing Association of the Philippines (ABAP) national tournaments. In those 4 tournaments he claimed the title of "Best Boxer" twice and really impressed those in attendance who knew they were watching someone a bit special.

Magsayo further impressed in a public sparring session with the highly ranked Genesis Servania. Servania, ranked #6 at 122lbs by the WBO was given a genuinely tough work out by Magsayo who showed off all the traits that we tend to look for in a promising prospect and more than held his own with Servania, who was preparing to face Isack Junior.

Magsayo would make his professional debut soon after that sparring session with Servania and happily introduced himself to viewers of "Pinoy Pride XX" as he destroyed Melton Sandal. Sandal, who was also making his professional debut, was dropped twice in just 129 seconds. Although Magsayo wasn't punch perfect on his debut a lot of that can be put down to nerves which often gets to debutants.

Since making his debut Magsayo has signed a multi-year-deal with ALA Promotions who have the intention of turning him into a world champion. From having recently seen his second contest, an opening round blast out of Jamjam Ungon, it's easy to see why so many are raving about this youngster who has been dubbed "Magnificent". He already appears to have great power, wonderful speed, patience beyond his years, intelligent movement and impressive shot selection (even if that wasn't on show too much on his debut).

The first really impressive result in Magsayo's career was a decision over John Rey Melligen, who himself was tipped by some to go on to very big in his own career and then followed that up by stopping Hagibis Quinones inside a round to end 2013 with an impressive ledger of 4-0 (3).

Although Magsayo had had a great 2013 he really excelled the following year as he scored 5 wins, including 4 by stoppage. The most impressive of those was a 6th round TKO against Ernesto Tata Fontanilla though what was more eye catching was that Magsayo seemed to be improving in every fight and a second round stoppage of South Korean visitor Moon Sun Jung, back in November, became especially impressive after Jung won the South Korean Super Bantamweight title, just 2 months later.

As impressive as Magsayo had been in his first 9 bouts there was questions about how he would look when he stepped up a level. He began to answer those questions in his 10th bout as he kicked off 2015 with a stoppage win over Thailand's Sukkasem Kietyongyuth, a former PABA champion. In that bout Magsayo seemed to show some nerves early on but show his class in the end as he eventually got rid of his Thai foe to advance his record and move one step closer to a title bout.

Since the win over Sukkasem we've seen Magsayo fight twice more, impressively stopping Rafael Reyes to claim the IBF Youth Featherweight title in the first of those bouts, and then stopping Yardley Suarez in his US debut. It was that win the win over Reyes that saw Magsayo claim his first title, and fight through some adversity, for the first time.

We've included the Reyes fight below for those interested in watching it.