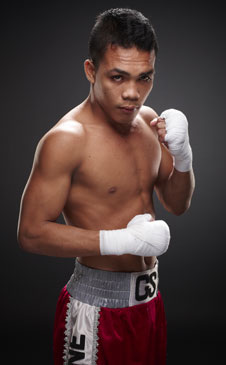 Whilst we tend to think Japan is the current "Asian boxing super power" it's fair to say that they have historically been given a great run for their money by the Philippines which seems to churn out top fighters year after year as if they have a conveyor belt developing talented young fighters. The next man on that production line appears to be the exciting and criminally under-rated Genesis Servania (27-0, 11) who appears to have developed into a highly popular and hugely talented young fighter.

Aged just 24 Servania is one of "the new generation" of Filipino fighters, the ones that have clearly been inspired by the likes of Manny Pacquiao and Nonito Donaire who would have been making their name whilst Servania was just a teenager. Despite the obvious inspiration Servania is no copycat of those men and appears to want to be his own man in the ring, an admirable quality for one as young as he is.

Despite his age Servania is fully fledged man in the ring with plenty of experience already including fights with numerous world level opponents. Despite being young he is no longer treat with kiddy gloves and is instead a fighter who is put in with genuinely top level fighters whilst moving himself onto the verge of a world title fight and a chance to emulate the great Filipino fighters over the years.

Unlike many top prospects Servania never had a long amateur career. Instead of learning his trade with years spent in the unpaid ranks the youngster began his boxing journey the intention of turning professional very quickly and from interviews it appears Servania only fought in a handful of sponsored amateur tournaments. Like many in his homeland he came from a poor family and the need for money just to eat was massive. An amateur career would have meant more struggles for the youngsters family and the decision to become a professional fighter was one made almost from circumstance as much as choice.

The short amateur career that Servania did have was enough to convince ALA Gym that he was worth signing professionally and in February 2009 Servania made his professional debut at just 17 years old.

On debut Servania made light work of fellow youngster Mike Espanosa, scoring a second round KO. By the end of 2009 the young Servania had advanced his record to an impressive 6-0 (3) and had already moved on to fighting in 6 rounders. He was still fighting limited opponents, like most young prospects, though he was developing quickly and showing the poise and patience of a fighter who could really go a long way in the sport. Of course there was still a whole world of work to be done but he was showing all the signs of a fighter with genuine world level potential.