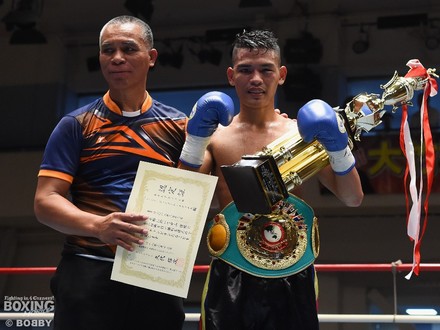 When we look at the Filipino scene it seems like the country has a lot of talent rising through the ranks. These include guys like Mark Anthony Barriga, for whom big things were always expected, and Edward Heno, who battled through a very peculiar 0-0-3 start to his professional. Arguably the most under-the-radar of those rising hopefuls is 21 year Jayr Raquinel (10-0-1, 7) who despite being the OPBF Flyweight champion is very much an unknown to many fight fans and hasn't had much in terms of television exposure. Despite that he has been impressive and his last two performance really do deserve a lot more attention than they've had.

Raquinel made his professional debut on March 31st 2014, less than 2 months after his 17th birthday, and really didn't need long at all to make an impression stopping fellow debutant Mark Cutara in 90 seconds as the Nasipit Gym. The card featuring Raquinel's debut was a really small one and he was one of 5 fighters to puck up an opening round win, impressive given there was only 6 bouts on the show.

The youngster would score his second win less than 3 months later, stopping the debuting John Paul Safera in 81 seconds. This was on another ill booked card at the Nasipit Gym, with 5 bouts, only one of which went beyond 2 rounds. Exactly 2 months later, on August 20th, Raquinel would score his third straight straight opening round win, stopping Rodante Suacasa in just 10 seconds.

Having fought for just 3 minutes and 1 second over his first 3 bouts Raquinel looked like a puncher but had questions to answer in regards to how he would cope when a fighter could take his power. Raquinel had a chance to answer that in October, in his 4th bout, as he took on fellow unbeaten Andro Debucas. This time Raquinel's power was the big difference maker, and instead he had to dig deep as he battled for a 6 round split decision win.

Normal service resumed in December when Raquinel blew out the experienced Michael Bastasa to end the year 4-0 (3). Sadly through his first 4 bouts very few fans had had the chance to see Raquinel and although it's understandable, given the fact he was a novice, he wasn't helped by the promotion of him which had him fighting on small cards with no real headline bout.