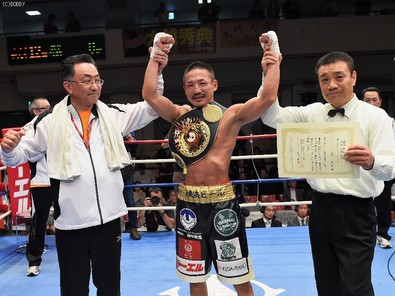 The Japanese boxing scene is rife with fast rising youngster, and the countries new wave of the on-going Golden Age is seems to be never ending. Despite the youngsters coming through the ranks there are still some veteran looking to make a mark at the top and prove that age is just a number. One of those wily veterans continuing their careers well into their 30's is Hidenori Otake (31-2-3, 14), who at the age of 37 is enjoying one of the most impressive runs of his career. That's despite making his debut almost 13 years ago, without a wealth of amateur experience and without a strong background from the unpaid ranks.

Otake debuted back in 2005 as a 24 year old, beating Kai Iijima at the Korakuen Hall. That win over Iijima would be the start of an 8 fight unbeaten run for Otake, as he went 6-0-2 (1) to begin his professional career. That run would however come to an end in November 2007, when Manabu Koguchi defeated him in the East Japan Rookie of the Year final.

Despite the set back in the Rookie of the Year Otake continued his professional career and developed from the loss, showing more power than he had and stopping his next two opponents before fighting to a technical draw with Takeshi Kimura at the end of 2008. The following year Otake would defeat Kimura in a rematch whilst fitting in 3 more wins to build some career momentum and move towards the Japanese rankings.

To begin 2010 Otake was 12-1-3 (5) and at the age of 28 seemed to be coming into his physical peak as he continued to rise through the Japanese rankings and notched up 3 straight stoppage wins, taking out Yohei Kudo, Hirotsugu Hashimoto and former OPBF champion Manabu Fukushima. The success Otake was getting was growing, his reputation was beginning to snowball, and he was beating progressively better opponents whilst edging closer and closer to a Japanese title fight.

In 2011 Otake would go on to defeat Kentaro Masuda in a clash between Japanese ranked fighters, and by then he was on the verge of a Japanese title fight, with a JBC #2 ranking. The only fighter in front of him in the queue Yasutaka Ishimoto, who had secured his shot at Masaaki Serie thanks to a win over Yu Enya at the Strongest Korakuen in October 2011. Thankfully for Otake he would get a crack at the title in late 2012, fighting Takafumi Nakajima in August for the title after Serie vacated the belt. Against Nakajima fans saw Otake dig deep and and narrowly out-point the then 28 year old for the title.