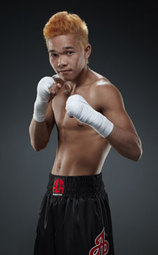 The Philippines has forever been one of Asia's top boxing countries. Since Pancho Villa stamped his name on the history books back in 1923 the country has been a conveyor belt of top fighters such as Ceferino Garcia, Gabriel "Flash" Elorde, Luisito Espinosa, Manny Pacquiao and Nonito Donaire.

One man wanting his name to be added to that illustrious list of names is the highly promising "Prince" Albert Pagara (26-1, 18), a 20 year old who some are tipping as the next great Filipino fighter.

Despite being just 19 years old Pagara is seen as not only a promising young fighter but also as a highly accomplished and extremely experienced youngster. The perfect combination of youth and understanding.

Although we do often doubt amateur records the reported record of Pagara is nothing short of amazing. He certainly won 10 gold medals in various tournaments, which considering his age was impressive, though he also boasts, apparently, an unbeaten 400 fight amateur record. Of course we can't say for sure that that figure is correct it does seem like there is no one currently out their claiming they beat him in the unpaid ranks.

Of course Pagara's amateur record didn't come at the highest level, and he's claimed no medals on the world stage, though the experienced of 400 fights will have really helped round off what appears to have been genuinely natural talent. A natural talent that appears to have been shared with his older brother Jason Pagara, himself a fringe contender