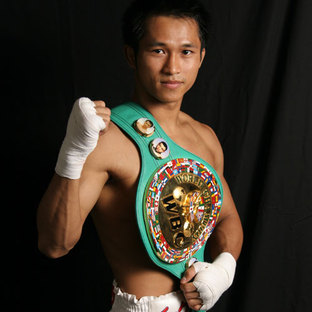 Picture courtesy of Kadoebi
Not many in the Minimumweight division are fondly remembered, though one man who is very fondly remembered is "Eagle" Den Junlaphan a fighter who was born in Thailand though made his legacy in Japan.

Born in 1978 into a large family in the Pichit Province of Thailand, Junlaphan was one of the more memorable Minimumweight's of recent years and actually had a bit of a cult following in his adoptive Japan where he became a 2-time WBC Minimumweight champion and forged a career that has left him as one of the most highly regarded fighters the 105lbs division has ever seen.

Junlaphan first began boxing in 1995 following in the footsteps of childhood hero Khaosai Galaxy and over the following 5 years he would run up a reported amateur record of 30-4 (25). Unfortunately, though as is often the case with Thai's, full details of his amateur achievements are sketchy at best, though it does seem fair to suggest he was a very capable fighter in the unpaid ranks.

In 2000, less than 5 full years after beginning to box, Junlaphan would make his professional debut and stop fellow debutant Saming Porkungpaorachada in Bangkok, Thailand. It wouldn't take long for him to add more victories to his record and in just a few months he had raced out to 4-0 (2) with all 4 contests taking place in the Thai capital.

In December 2000 Junlaphan got married to a Japanese lady and set his mind on moving to his wife's native Japan. This saw his boxing career almost come to a premature end as he thought of retiring. Thankfully he would continue with boxing and return to the ring the following year where restarted his career in Japan after joining the Kadoebi stable of fighters. The move to Japan not only saw Junlaphan changing the gym he was fighting in but also saw him changing his name to “Eagle Okuda”. The name change was one of many that he saw through his career though, Eagle would become more of an adoptive nickname regardless of his sponsors name.