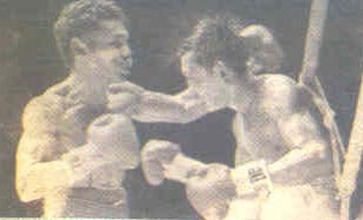 Courtesy of Boxrec.com
Through out the history of Indonesian boxing we've had 4 world champions. The first, as we've covered in the past, was Ellyas Pical, a former 3-time IBF Super Flyweight champion, who is considered a boxing icon in his homeland.

The second world champion from Indonesia was the former Minimumweight champion Nicholas “Nico” Thomas, a man who has been widely forgotten by boxing fans around the globe despite his important historical position in Indonesian boxing history and his long career which began in 1986 and finished in 2006.

Born in the summer of 1966 on the small Indonesian island of Ambon, Nico was part of a large family, being the 12th of 16 children and surprisingly he wasn't the first to go in to boxing.

In fact Nico followed in the footsteps of older brother Charles Thomas who began training young Nico when he was just 5 years old. Although Charles himself doesn't appear to have had a professional career he was a stand out amateur who was not only a national champion but was a 3-time competitor in the “Presidents Cup”, a competition he won in 1979 and came runner up in both 1976 and 1980.

With Charles teaching a young Nico the boxing trade it wasn't long until Nico himself broke out as a talented fighter and as an amateur he went on to claim the Silver medal at the 1985 South East Asian (SEA) Games and apparently the 1986 President's Cup Gold medal.