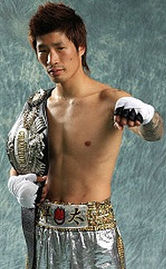 Courtesy of Boxrec.com
When we talk about recognised Japanese fighters it's fair to say that one of the most over-looked is former WBC Super Flyweight champion Yota Sato (26-3-1, 12) who is all but an unknown outside of the East. Despite this the 29 year old is amongst the very best pound-for-pound fighters in Japan and has shown himself to be one of the most criminally under-rated fighters on the planet.

Despite starting his career with a debut loss to Kazuki Yamato back in 2004 Sato has really made himself in to a genuinely top tier fighter. In fact since starting his career 5-2 Sato had spent more than 7 years unbeaten as he climbed up the rankings and to a world title strap, before recently losing it to Srisaket Sor Rungvisai.

As mentioned above, since his second loss in 2005 (the narrowest of narrow decisions to Junichiro Sugita) Sato went on a streak winning 21 of 22 bouts. The only mark in that time was a draw with Filipino born Japanese based Zerofit Jerope  who had also drawn with talented South African Vusi Malinga.

The winning streak of Sato's had genuinely been impressive. Not only did he claim the interim Japanese Super Flyweight title by defeating the then unbeaten Go Onaga but he then claimed the full title by beating former world title challenger Daigo Nakahiro. As the Japanese champion Sato would defend his belt 4 times defeating Yuki Fukumoto, Kohei Kono (who then went on to hold the WBC Super Flyweight title), Yoshihito Ishizaki and the then unbeaten Kenjo Oba.