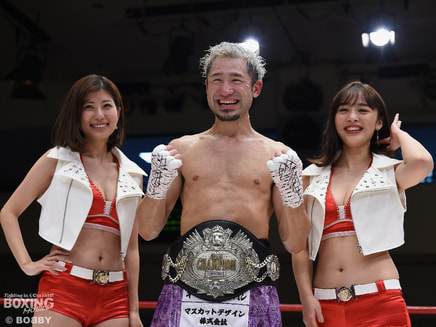 Despite the Japanese Lightweight scene not being regarded as brilliant, and it's been over a decade since Japan last had a world champion at 135lbs, there is plenty of interest there right now. There's a number of talented fighters there, such as OPBF champion Masayoshi Nakatani, WBO Asia Pacific champion Nihito Arakawa and youngsters like Shawn Oda, Kaiki Yuba, Go Hosaka and Yoji Saito.

The Japanese Lightweight who has impressed us the most so far however is national champion Shuichiro Yoshino (9-0, 7), who appears to have the most wrinkles to his game, the strongest amateur pedigree and the most overall promise. He's also 27, at the time of writing, which means that he's probably on the verge of his biggest career bouts.

To start with we did mention Yoshino's amateur credentials and they really are strong. He won 4 High School titles, went 104-20 (55), competed on the international stage, and was once aiming to compete at the Olympics. He would miss out on the Olympic dream and actually walk away from the sport, before rediscovering his passion for boxing, and since then things have gone from strength to strength for the unbeaten hopeful.