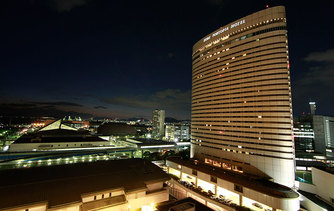 One of the newest venues to join the boxing world is the luxurious Portopia Hotel in Kobe. The hotel, which is huge and features a 745 guest room as well as 13 restaurants and bars, is simply breath taking and looks genuinely amazing both inside and outside, in fact it looks a little bit like a Las Vegas style hotel which we'd see hosting fights on HBO or Showtime in the US.

The hotel's first link to boxing was that one of it's staff members, Teiru Kinoshita, worked at the hotel whilst also pursuing his professional career. It was due to Kinoshita that the hotel then became a venue for the sport and on July 18th 2014 it will join the long list of illustrious venues to have hosted world title fights.

Although no fights have yet taken place in the hotel we've been informed that the venue is ideal for fights. The Portopia Hall holds more than 1700 people and the hotel has fantastic transport links both by rail and air as well as all the modern day amenities expected in a world class hotel. And better yet you could spend the night at the hotel after the fight and enjoy not just the fights but also the amazing scenes and sights of Kobe.

Whilst we acknowledge that the hotel is only a boxing venue due to the success of Teiru Kinoshita we really hope that he manages to come out victorious on July 18th when he battles South Africa's Zolani Tete. If he can manage to win the world title there is every chance the venue could become one of the staples of the Kobe boxing scene alongside the Sambo Hall and the Central City Gymnasium, both of which have hosted fights regularly in recent years. If that happens then Kobe would have it's own boxing version of the MGM Grand, albeit on a smaller scale and if Kinoshita continues to fight in the hotel he literally will have his own boxing home which could really give him a huge edge.

For those interested in know more about the Portopia hotel their website can be found at http://www.portopia.co.jp.