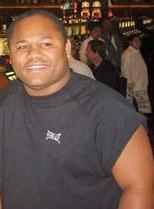 Courtesy of boxrec.com
When we talk about young prodigies in the boxing world we usually talk about fighters who turn professional very young, get matched softly and go on to have a long and fruitful career at the top. For some however things aren't that simple and in the case of former WBA Light Welterweight champion Morris East (20-4-0-1, 12) he certainly wasn't given the cotton wool wrapped boxing beginnings of many other top youngsters in the sports great history.

Born in August 8th 1973 in in Olongapo City, Zambales East was the son of a Filipino woman and black American navy sailor. Unfortunately due to his fathers job the two didn't meet until East had become a world champion and his father was himself in bad health passing away not long after they first got in touch with each other.

East first took to boxing as a very young teenager under the guidance of Sammy Gello-ani, a very well known promoter in the Philippines. Gello-ani took East under his wing and brought him to the Cebu Coliseum gym and it was after spending some time there that Gello-ani would help to organise amateur bouts for East, who of course used the money from the fights to feed himself.