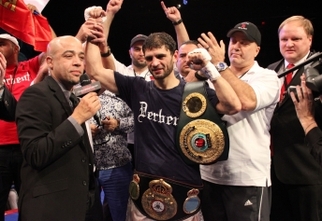 Courtesy of Toprank.com
Over the past few years the Light Welterweight division has been on of boxing's most exciting divisions with amazing talent, memorable fights and generally the best taking on the best. The division has seen very little “ducking” as it seems every fighter there is looking to make a real name for themselves.

One fighter who has really started to create a buzz in recent bouts is the current WBA champion Khabib Allakhverdiev (19-0, 9), a man known as “The Hawk”.

Born in Russia in 1982, Allakhverdiev had, like many others from Russia, a stand out amateur career. In total it's reported that he had around 220 fights (though other reports to suggest that he had just shy of 200) in the unpaid ranks and won around 90% of them.

Of course it's not just about the number of fights one has in the amateurs but also their achievements. Allakhverdiev didn't just fight a lot but claimed a huge number of titles and medals including several Russian domestic titles and various low level international tournament titles, though his outstanding achievements were certainly a bronze in the 2005 World Amateur championship and a Gold at the 2003 World Military Games.