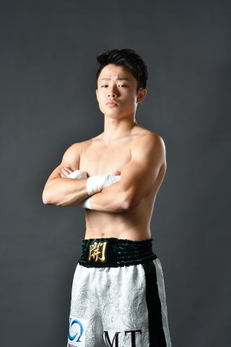 The Japanese Youth Scene is a really exciting one right now, with a huge number of fighters not only rising through the ranks but also being matched brilliantly, allowing them to quickly develop and make a name for themselves. One of the many rising youngsters making their mark on the Japanese Youth scene is Kai Ishizawa (5-0, 5), a Minimumweight who recently won the Japanese Youth Minimumweight title and really showed that even at 5-0 a fighter can look the goods, and get through serious tests.

Ishizawa first made his mark on the Japanese amateur scene, running up a 28-14 record in the unpaid ranks. There's not much details of what he accomplished in the unpaid ranks, but with over 40 fights in the amateur ranks it's clear he learned a fair bit and understood boxing before turning professional in 2017.

When Ishizawa finally turned professional he signed with the MT Gym, the same gym that manages the fast rising Junto Nakatani, and has since been matched aggressively, with MT trusting their guy despite being matched hard.

Prior to making his debut Ishizawa took part in a public pro-test bout at the Shinjuku FACE in Tokyo. That test bout saw Ishizawa looking powerful, quick, sharp, physically strong and very exciting. Although there was some flaws with his work, he instantly caught the eye and it was instantly clear from his pro-test bout that he would be really exciting to follow.