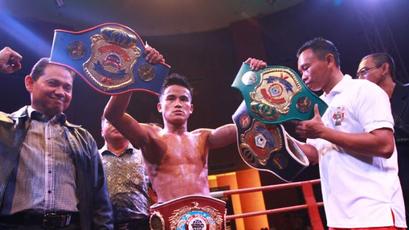 Indonesian boxing has historically been under-whelming, with the country boasting just 4 world champions in it's history, and only a handful of contenders, such as Daud Yordan. Ruight now however it has a number of intriguing prospects, most notable of whom is teenager Iwan Zoda (10-1, 9).

Zoda came to the attention of fight fans last year when he avenged his sole loss and won a real war with the then unbeaten Petchchorhae Kokietgym in Thailand. Prior to that bout Zoda's name was only really known in Indonesian circles but following the win he instantly became “one to watch” and real break out name among boxing's hardcore fans.

A young Zoda was showed brilliant athletic talent as a youngster though unfortunately came from a poor background, where his father had left Zoda's mother and 3 siblings. The athletic talent lead Zoda's mother to taking her son to the gym of Damianus Yordan, the brother of Daud Yordan. Damianus seemed to realise that he had a raw talent on his hands and went to work on improving the youngster's ability to fight.

In September 2014 Zoda made his professional debut and took on unbeaten domestic foe Stevanus Nana Bau. The then 17 year old Zoda took a 6 round decision win over Bau in a show at the TVRI Studios in Jakarta, some distance from Zoda's home in home of Sukadana.

Zoda's next bout, just weeks later, saw him travel to Nakhon Ratchasima in Thailand to take on the then 7-0 Petchchorhae Kokietgym. That bout saw Zoda suffering a 6 round decision win to the Thai though show signs of being a diamond in the rough.

The experience of facing Petchchorhae appeared to help develop Zoda and he was back in the ring about 5 weeks later, when he scored his first stoppage win, defeating Louis Loemoli in 2 rounds. Just 3 weeks later he notched another stoppage, taking out Een Nuryanto in the 5th of a scheduled 8 rounds.

To end 2014 Zoda fought in Pontianak for the first time, and it was there that he stopped Benigno Nino in 5 rounds, to record a third stoppage in the space of 7 weeks.

Despite having only been a professional since September 7th Zoda had managed to run up a 4-1 (3) record by the end of the year and it was clear that he was happy to be in the ring and kept active, where he could earn some money and build his experience and reputation.

Following the intense activity to end 2014 Zoda did take a small break from the ring before returning on February 22nd 2015. That return saw Zoda rematch his debut opponent Stevanus Nana Bau, and this time around Zoda managed to see off Bau, scoring a 7th round TKO win in what was scheduled to be Zoda's first 12 rounder.

Zoda's second bout last year saw him continue his stoppage run by blowing away Thailand's Saichon Or Ounsuwon in 2 rounds, significantly quicker than the likes of Kohei Kono or the other notable names that Saichon had faced.

Less than 3 months after the victory over Saichon we saw Zoda return to Thailand as he managed to get a rematch with Petchchohae in Bangkok, some 11 months after their first meeting. The bout saw Zoda, then 6-1 (5), up against Petchchorhae who had extended his unbeaten record to 13 fights, running up a 13-0 (8) record. Despite losing the first time the two men had met Zoda showed his huge improvement as he went and battered Petchchorhae into a 12th round stoppage. The finish could have come earlier with the Thai taking a genuine beating in the later rounds before, eventually, being stopped. That win saw Zoda claim a regional title and make a serious mark with fans, who began to talk about the youngster and take note of his name.

To end 2015 Zoda continued his stoppage run by defeating the aggressive Phupha Por Nobnom in 3 rounds on New Year's Eve. The win saw Zoda being forced to take a few solid shots, but he showed his composure and confidence to defeat the Thai and extend his winning run to 7 bouts, all stoppage.

To begin 2016 Zoda claimed the IBF Youth Flyweight title with a dominant win against Hungarian foe Szilveszter Kanalas. The Hungarian had been unbeaten entering the bout but Zoda just bullied him before securing a 3rd round TKO win in an impressive performance of ultra-aggression. Since that win he has scored just one more, stopping Jack Langodi Timor in 6 rounds back in April.

Interestingly, at the time of writing at least, Zoda is one of the few fighters who has not only beaten every man he has faced but has also stopped them all. He'll be hoping to continue that impressive record when he steps back in the ring later this year, with his team trying to get him in the ring as early as March.