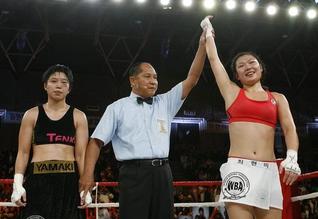 Courtesy of Boxrec.com
For many boxing fans the biggest story about any boxer is what they do in the ring. Their life outside of it is merely a distraction to the action inside. For some fighters however the opposite is true and it's what they do outside of the ring that really influences them inside it. Korean fighter Hyun-Mi Choi (10-0-1, 3), AKA "Defector Girl Boxer", certainly falls in to that second category.

Born in 1990 in the North Korean capital of Pyongyang, Choi was fortunate to be born into a relatively successful family. Her family, unlike many in North Korea did have some money and her parents, whilst not rich by western standards were certainly more well off than many other North Koreans.

Thanks to the moderate wealth of her family Choi was well fed and at school she looked bigger than many of her malnourished classmates. As well as being taller and naturally bigger she was also a real athlete who was quicker than her school friends and showed potential, despite only being a very young girl, of being someone who could represent North Korea at the Olympics.

Aged just 13 Choi was approached by North Korean officials who wanted to train her as a boxer the 2008 Olympics in Beijing. At the time it appeared likely that women's boxing would be included in the games and by the time it came around North Korea wanted a team of fighters capable of winning gold.

As we all know women's boxing wasn't actually included in the '08 Olympics but the training the North Koreans had given Choi had helped realise that this was what she wanted to do with her life.

Although Choi's parents, as we mentioned above, were moderately well off they felt they owed more to to their family so in 2004 their father defected to South Korea. Choi and the rest of the family, including her mother, would soon follow taking a journey that took them through China and Vietnam before reaching Choi's father in South Korea.

Having given up their status in North Korea the family knew they had sacrificed for their new beginning though it wasn't long until Choi was finding boxing success in South Korea and the family had settled, albeit in a smaller home.