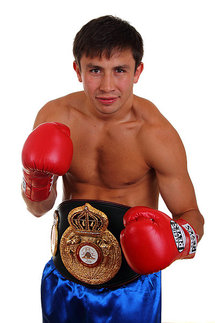 Courtesy of Boxrec.com
One of the worlds hottest rising boxing stars right now is Kazakhstan's Middleweight Gennady Gennadyevich Golovkin (35-0, 33) who is better known to boxing fans as "GGG". He's a fighter who in the last year or so has broken through from being a well respect former amateur to being an all conquering and destructive force in the 160 division.

Born in Karaganda, Kazakhstan in 1982 Golovkin's talent was obvious from an early age and as just a teenage he was winning amateur tournaments.

The first international amateur tournament that Golovkin appears to have won was the Brandenberg Cup in Germany in 2000. Just a month later he over-shadowed that achievement by claiming the World Junior Championships in dominating fashion.

Golovkin's amateur career went from strength to strength as he ran up a collection of titles and victories over men who later become known in their own right.

The crowning achievement of Golovkin's time in the unpaid ranks however came in 2003 when he defeated Matt Korobov, Lucien Bute, Andy Lee, Yordanis Despaigne and Oleg Mashkin inside a week to claim the World Amateur Championship.

The Kazakhstani fighter almost added an Olympic Gold the following year when he came runner up in Athens to the experienced Gaydarbek Gaydarbekov. Although Golovkin "only" took a Silver here he did score a notable victory over Andre Dirrell who became yet another notable name on a long list of notable names that Golovkin defeated in the unpaid ranks, a list that also includes Daniel Geale.

The total number of fights Golovkin had as an amateur is actually unknown. Although it's widely reported as 350 fights, winning 345 and losing 5 though we've seen some claims that he actually suffered 8 losses so we think his total may be closer to 360 than 350. What is known however, is that he was skilled and very spiteful with his punches which caused numerous stoppages despite the head gear that amateurs wear.