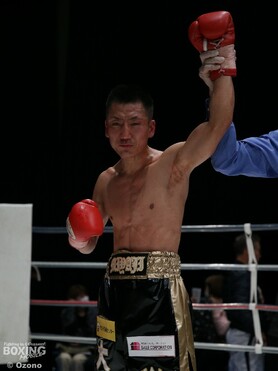 Osaka is the home of numerous boxing gyms, some big and some small. One of the smaller ones is the Taiho Gym, run by former Japanese Flyweight champion Kenbun Taiho. The chairman of the gym would be a best known for winning the national Flyweight title and then going on to challenge Myung Woo Yuh for the WBA Light Flyweight title in 1989.

The gym isn't too well known but is an active gym and does have a number of fighters of some note, the most interesting, and promising, is arguably Dynamic Kenji (10-7, 3), who was also known as Kenji Kihisa earlier in his career.

The 28 year old Kenji is currently campaigning at Super Flyweight and is edging towards a title fight of some kind. Despite this he wasn't actually someone with a big amateur pedigree, or much expectation on his shoulders when he turned professional.

Kenji debuted back in on December 21st 2013, just a day before his 23rd birthday. He would come out victories on debut, stopping fellow debutant Koji Noro early in the second round. He would follow that up with a decision win over Kyosuke Takaoka.