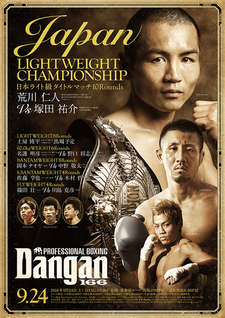 Not many Japanese fighters have left a big impression on American fans in recent years but it's fair to say that they won't forget Japanese Lightweight Nihito Arakawa for a while. Since losing to Omar Figueroa in 2013 we've Arakawa rebuild and claim the Japanese Lightweight title. At Dangan 166 Arakawa took on Yusuke Tsukada in the first defense of that title. The bout was Tsukada's first at title level and although a big under-dog he entered the bout knowing a win would totally change his career and open up big doors going forward.

On the under-card was Shuhei Tsuchiya, who is the mandatory challenger for the Japanese Lightweight title in 2017 and will fight the winner of the Arakawa/Tsukada bout. Their was also 3 other under card bouts on the show, though in fairness none of them had much intriguing to those outside of Japan.

The card was shown live over the Boxingraise service and was held at the ever popular Korakuen Hall, a venue that has often shown bouts with Kato and Tsuchiya.