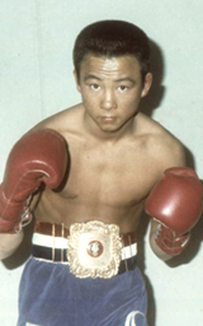 Courtesy of boxrec.com
Not many fighters manage to claim a title a day after their 21st birthday and hold that belt until the end of their career but unfortunately that's what the tragic Masao Oba (35-2-1, 16) did in the early 1970's when his career was cut short by a fatal accident.

Known affectionately as "the eternal champion" Oba is a fighter who left us with more questions than answers due to his untimely death in 1973, though what he did before then was nothing short of fantastic.

Born in to a poor family in 1949 in Tokyo, Oba knew he'd always have to do something notable to be remembered and to help change the fortunes of his family. As with many top fighters, boxing seemed to be his way out of poverty and whilst still a child Oba knew that was going to be his route.

As a teenager Oba walked in to the famous Tokyo Teiken Gym and despite being a diminutive kid he excelled with natural desire and talent that allowed his trainers to develop his boxing whilst he developed in a man.

Just weeks after Oba turned 17 he would begin his professional career and make a statement stopping fellow debutant Kazuyoshi Watanabe in just 48 seconds. Despite only being a youngster it was obvious from his victory over Watanabe that Oba was a prodigious talent and his handlers swiftly got him back in the ring with him scoring 2 more early victories in successive months,