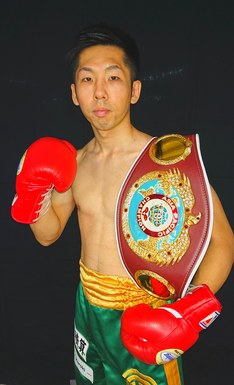 On December 31st we'll see little known Japanese Masahiro Sakamoto (13-1, 9) have the biggest fight of his career, as he goes up against IBF Flyweight champion Moruti Mthalane in Macau. It's fair to say that most fight fans, especially those in the west, will know very, very little about Sakamoto. In fact even those who actively follow the Japanese scene may not have seen much of Sakamoto due to how little exposure he's had.

With that in mind we thought he was a great fighter to do a profile on, and help fans get up to speed on the up coming title challenger, who really will be getting the opportunity of a life time when he faces Mthalane on New Year's Eve.

Born on January 19th in 1991 in Sakai City Sakamoto would only have a short career as an amateur, running up a reported 24-6 record in the unpaid ranks. Whilst still studying he would begin his professional career, at the age of 23 whilst under the guidance of the Osaka based Mutoh gym.

Sakamoto would debut on December 28th 2014, at the Sumiyoshi Ward Center, taking a razor thin decision win over Yusuke Hiranuma. Boxmob described him as a "highly educated" fighter, due to the fact he was at studying at a high level, and he fought with an intelligent style, boxing behind a sharp jab.