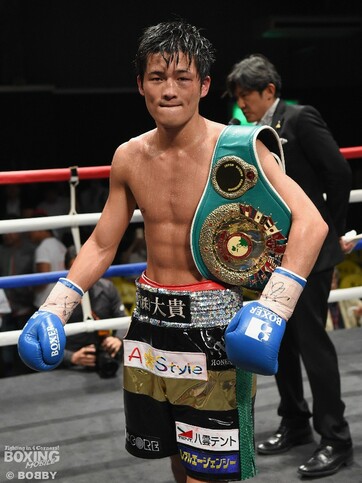 When we talk about the Watanabe Gym's greatest ever fighters it's hard to think of anyone who matches up to Takashi Uchiyama, one of the greatest Japanese world champions of all time and for years he was the crown jewel of the gym. Uchiyama was, of course, the Super Featherweight and the Watanabe gym right now has a brilliant Super Featherweight making his mark on the sport looking to emulate the success of Uchiyama, who reigned supreme as the WBA king for years.

That rising fighter is the unbeaten Hironori Mishiro (6-0-1, 2), who has a very different style to Uchiyama, but is on a clear fast track to becoming the next Watanabe star at 130lbs.

Mishiro was an amateur standout, like many fast tracked Japanese fighters. His amateur record was 41-16 (4), he captained his university boxing team and was in numerous national amateur tournaments.

That amateur experience saw Mishiro develop fantastic footwork, and since turning professional he has worked on the other parts of his game, to make him a more rounded fighter. As well as his stellar footwork from the amateurs Mishiro has a fantastic jab, which is sharp and accurate, and true natural hand sleep and fluidity to his boxing. Those traits were obvious from very early in his professional career and it was clear that Mishiro was an experienced and developed fighter before he made his debut.