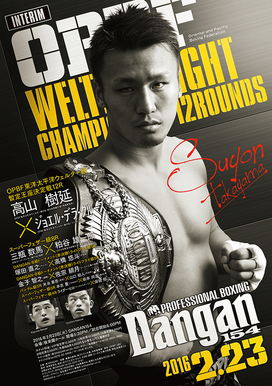 The Dangan card are one of the most frequent shows in Japan with several held during a typical month, the shows promoted by "reason" are run by Dangan who are not only in charge of the shows but also pay service Boxingraise and unlike many promoters in Japan they don't actually have their own gym or professional fighters to fill up the cards. Instead of use their own fighters they put together shows where the fighters are from a range of gyms, and they act more like an agent for the show's promotional activity rather than as a typical promoter, where they have a clear favourite in the bouts.

Dangan 154 was headlined byKadoebi Houseki fighter Suyon Takayama, a former Japanese Welterweight champion, facing Filipino veteran Joel Dela Cruz for the OPBF "interim" Welterweight. As well as that main event bout the card also featured an intriguing match up between Yuichiro Kasuya and Kazuma Sanpei, in what was a great bout on paper, and several bouts over the unusual 5 round distance.

Notably this card was added on Boxingraise well after it took place and was one of the many recorded shows added to the service as part of an on demand section.