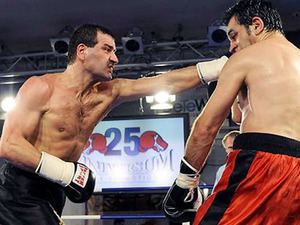 Courtesy of http://uzland.info/
When we talk about Asia we typically think of the Orient rather than Central and Western Asia. Despite this it's fair to say that the non-Oriental Asia has given us some genuinely tremendous fights and fighters over the years including “King” Artur Grigorian (38-1, 23), unarguably the greatest fighter from Uzbekistan and one of the premier amateurs of the early 1990's.

Born "Atuiz Grigorjan" in 1967 in Tashkent, then part of the Soviet Union, to Armenian parents Grigorian has links to being Armenian, Soviet and Uzbek. In the 1960's of course none of those countries really had any sort of professional boxing icons to look up to. Thankfully Grigorian took up the sport and was one of the leaders in the development of boxing for all 3 areas becoming one of the top German based names of the 1990's.

Grigorian began boxing when he was an 11 year old child and started making his name around a decade later when he began picking up notable tournament victories including silver medals in back-to-back soviet championships (1990, 1991) and a Gold medal at the 1990 Goodwill games, beating American Shane Mosley along the way.

The success in the lower level tournaments grew more success for Grigorian who would compete at the 1991 World Championships where he claimed a Silver medal losing to talented German Marco Rudolph in the final after having beaten Hong Sung-Sik of Korea in the second round. Unfortunately however this Silver medal was the highlight of his amateur days as he was defeated by Hong in the second round of the 1992 Olympics and beaten at the same stage in the 1993 World Championships by Frenchman Nordine Mouchi.